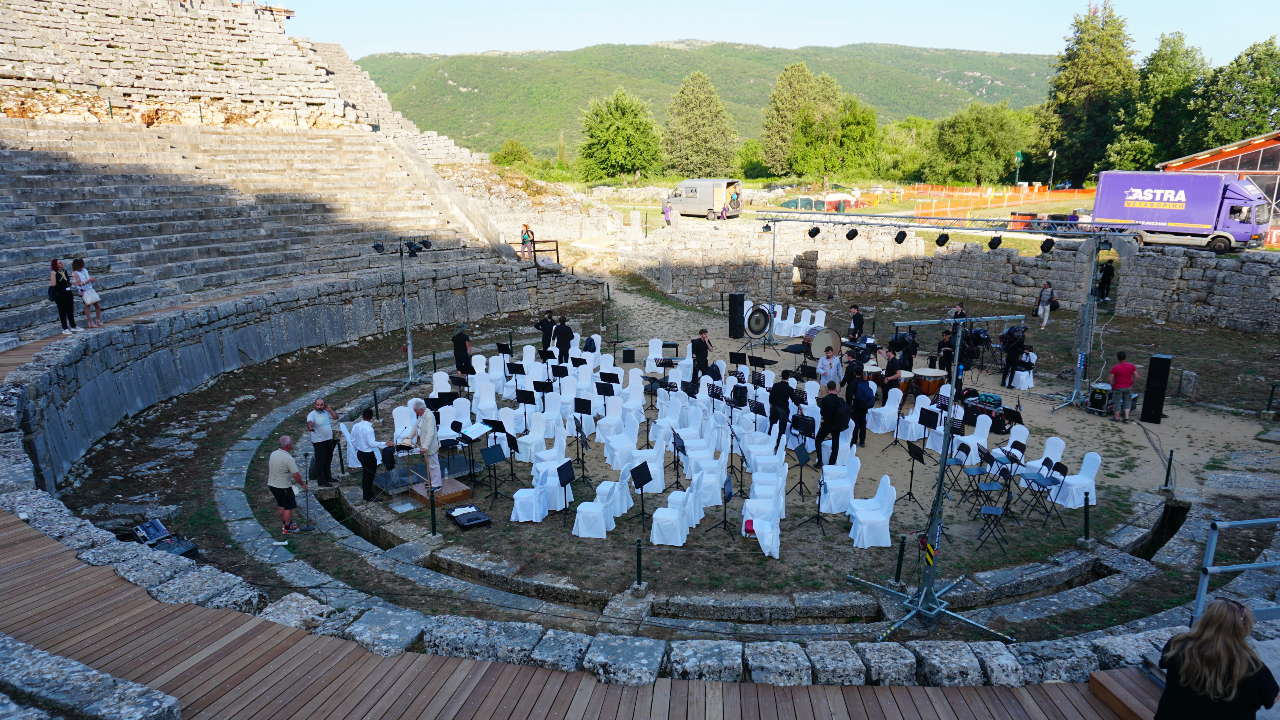 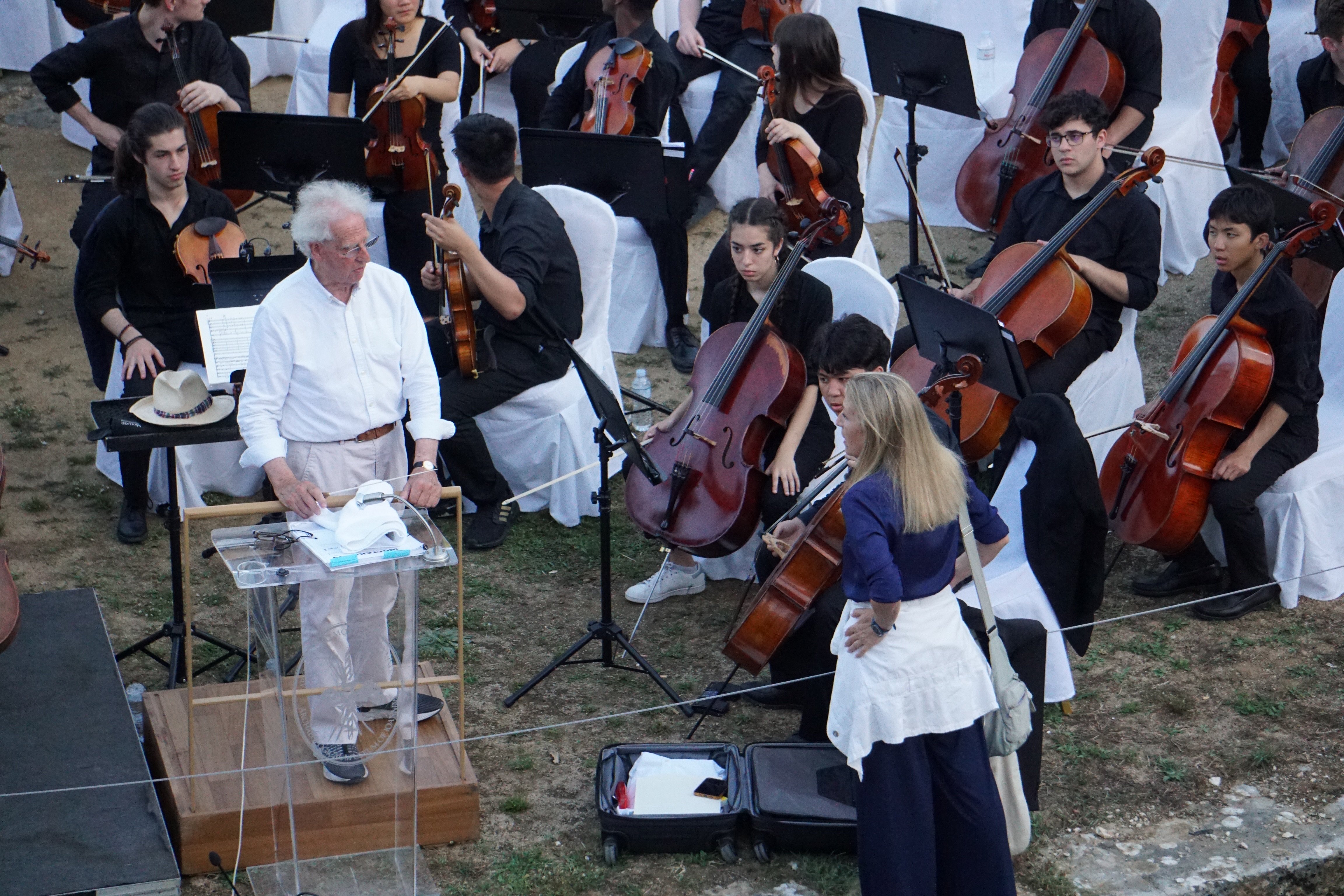 Another day, another stirring venue. Corfu certainly cast its spell on the BPYO: I’m sure we could have passed a further week in the place and not heard a word of dissent from anyone in the group. But there’s a schedule to be kept and other places to go.

Over its first decade, the BPYO has visited many of the most storied concert halls in the Western world. Yet it will likely never play in an older or more historically striking venue than the one in which it appeared on Tuesday night: the 2500-year-old Ancient Theater in Dodoni, which is located about ten minutes from the city of Ioannina in northwestern Greece. Originally built as a theater by the Greeks, it was later converted into an arena by the Romans. The place is truly a bit of living history: the walls and holding cells that were used for gladiatorial combat two thousand years ago are remarkably well preserved; it takes little effort to imagine the space being put to a very different use than the one for which we employed it.

Our appearance in Dodoni coincided with a couple of things: first, the World Day of Music (which is celebrated every June 21st) and, also, the opening of a restored section of the Dodoni complex. Accordingly, the concert itself was prefaced (and delayed by about half-an-hour) by a series of speeches from various dignitaries, including the President of the Greek Parliament and the country’s Minister of Culture. Afterwards, the BPYO took to the floor with a reprise of the Athens program (La valse, Elgar’s Cello Concerto, and Shostakovich Five). 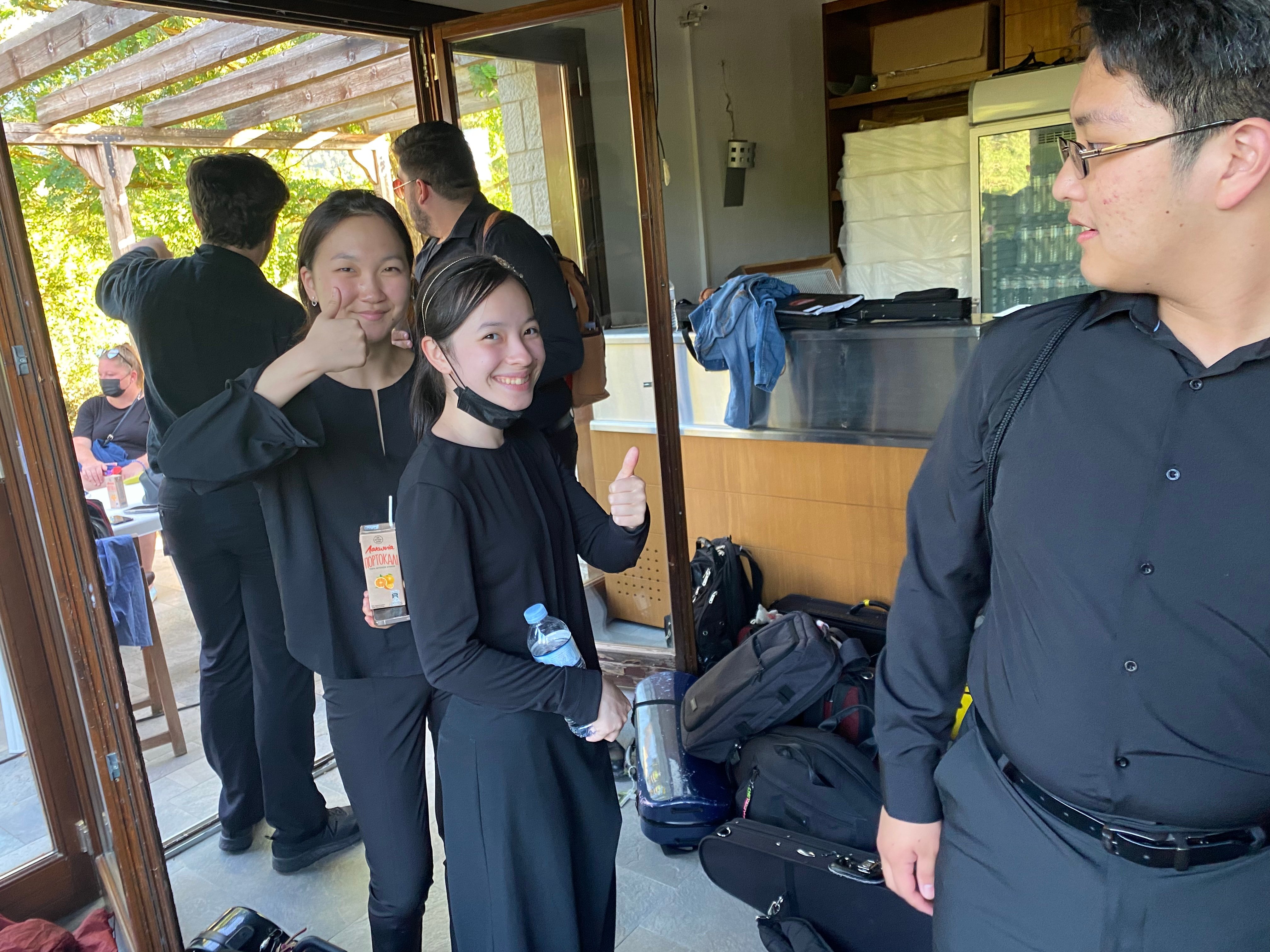 As in Corfu, an outdoor location like this one might not be the ideal space in which to hear an orchestral concert. And yet, what came across on Tuesday was thrilling in its own right and for its own reasons.

In La valse, for instance, one could hear the little details of the orchestration to a degree that rarely, if ever, comes out in a traditional concert hall. While, over the years, I’ve read various criticisms of the piece arguing that it’s among Ravel’s shallower efforts, expressively, I’ve never found any of them persuasive: the score is one of the most harrowing works in the repertoire, brilliantly structured, and scored with a finesse that is simply astounding.

On Tuesday, one heard many of those subtleties – the exchange of burbling duples between basses, bassoons, and clarinets just before the waltz proper begins; the dovetailing triplets in the woodwinds in the middle; the tuba line as the piece reaches its denouement – with klieg-light-like clarity. Yes, one missed the floorboards shaking at the music’s shattering climax, but the strings (especially the upper ones) were still sumptuous and velvety when they needed to be and the whole thing danced persuasively. 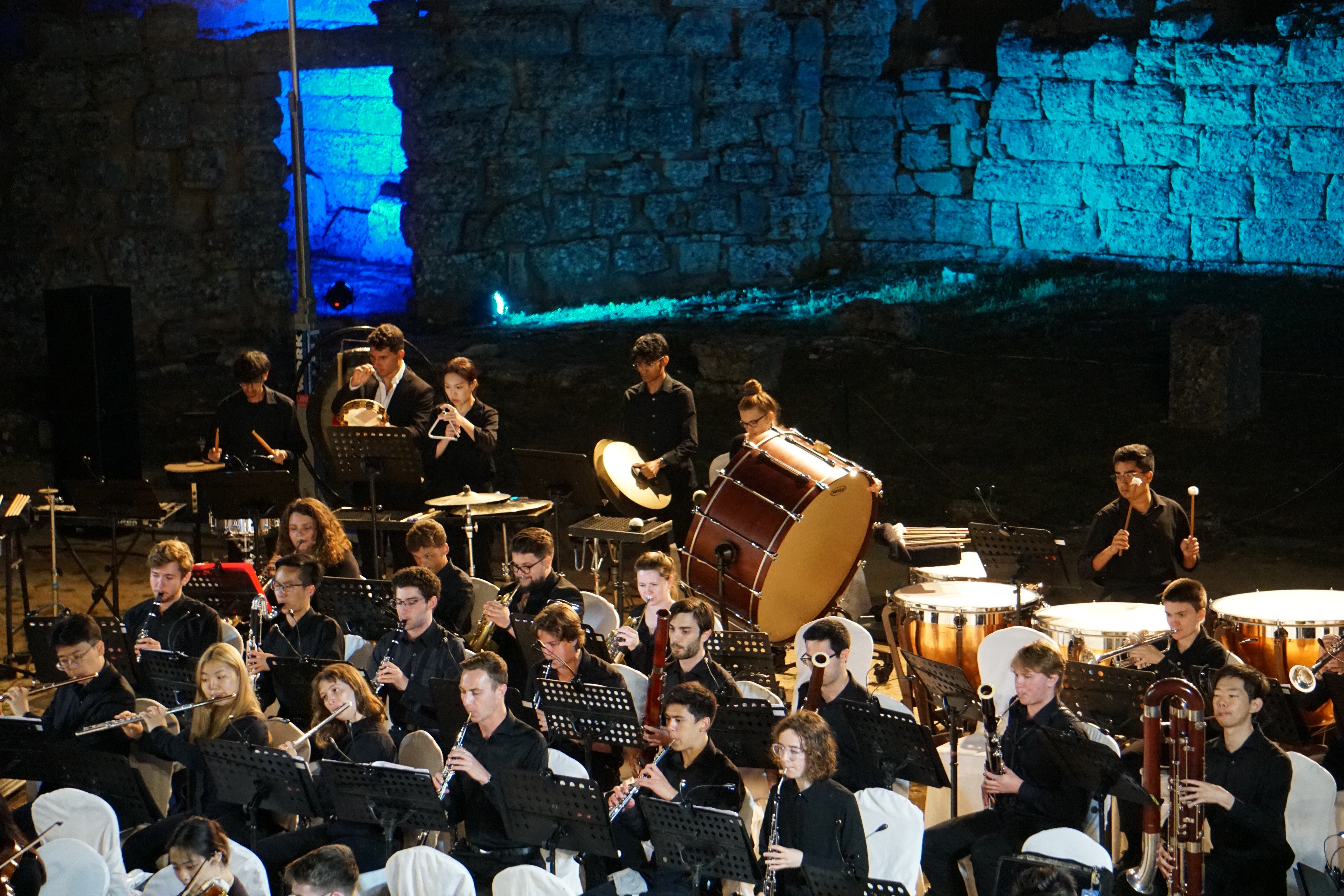 BPYO woodwinds and percussion in action in La valse.

The Elgar Cello Concerto also came across with a good degree of lucidity, though here one missed the intimacy provided by a hall like the Athens Megaron. A big part of the issue stemmed from the fact that Zlatomir Fung’s instrument was amplified and, while up at the top of the theater that fact was largely unnoticeable, further down (where I was sitting) there was a discrepancy between the quality of his tone and the orchestra’s.

Regardless, this was another typical Zlatomir performance, which is to say brilliant and passionate. The blessing of microphones for the audience, of course, is that they can hear everything. The curse for the performer is the same – there’s no place to hide. But Zlatomir doesn’t really need a safety net: though he might disagree (he’s one of the most charmingly humble people I’ve met), he is very much that good. As always, his reading of this most elegiac of concerti was profoundly musical and warmly shaped. 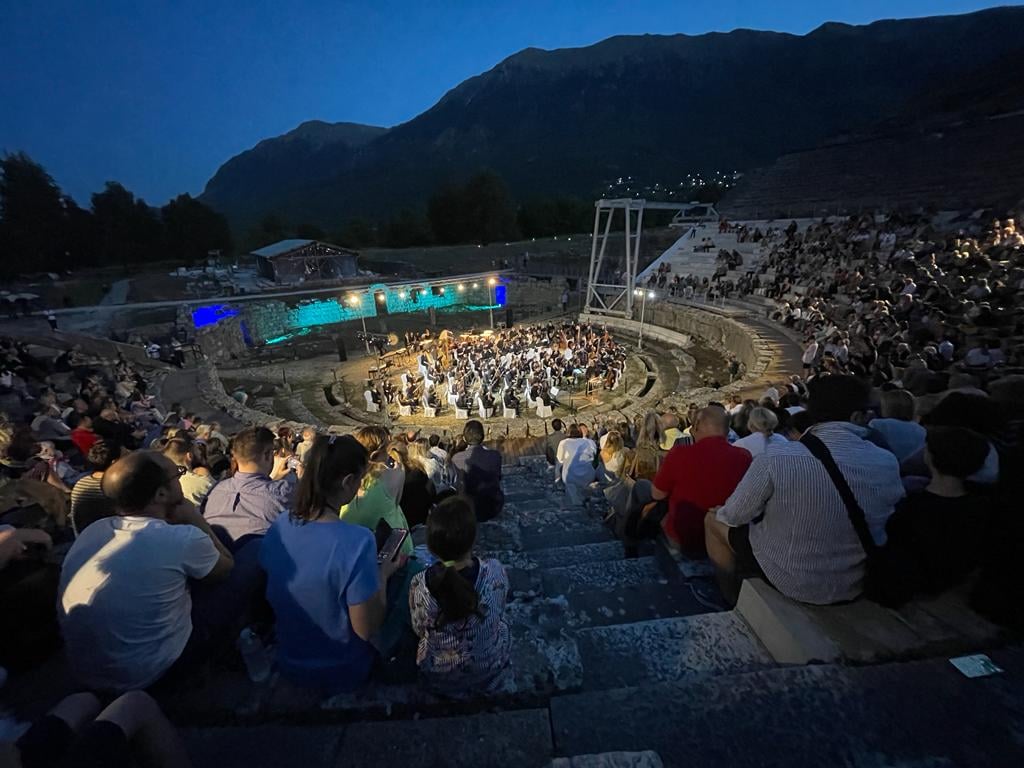 The BPYO and Tuesday night’s audience at the Ancient Theater in Dodoni.

The orchestra, though their sonority was of a slightly different tonal character, played with keen attention to detail. As in the Ravel, it was fascinating to hear the contrasting qualities of the Concerto’s orchestration broken down (as it were) by instrumental families: the glowing woodwind chorales, cleanly balanced string chords, and stern brass attacks, among other things.

Our audience – one estimate put the crowd at over 2000 listeners, and they were of all ages: families with children; teenagers; adults young, middle-aged, and older – followed it all with alacrity. They were clearly invested in what they were hearing. At a couple points in the first half, I looked over to see several people in the rows across from me swaying to the rhythms of La valse or keeping time with their feet or shoulders during the Elgar. Zlatomir rewarded their enthusiastic applause with a radiant, dancing performance of the Bourrée from Bach’s C-major Cello Suite and then Benjamin Zander, in a stroke of genius, suggested only a five-minute break before starting the Shostakovich (ostensibly this was because there weren’t any bathrooms on site; but, also, by this time it was getting pretty late).

We had, as it was, a little seventh inning stretch, and then the BPYO launched into a potent account of this Fifth Symphony. As in the other pieces, there were things that might have sounded better in Symphony Hall – for instance, woodwind solos, though free and beautiful, didn’t project quite so well as normal. But the overall reading was gripping. 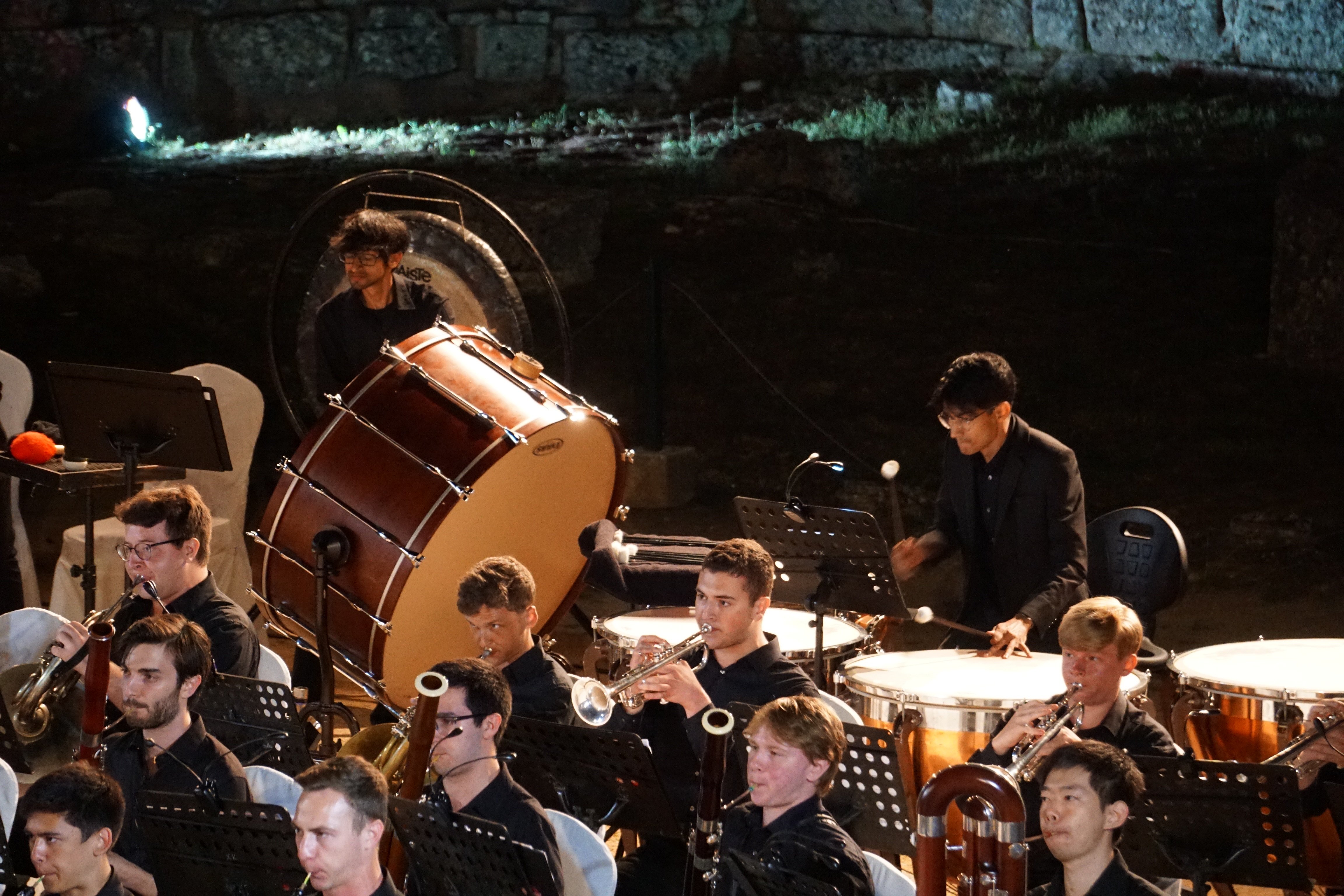 The first movement was all concentrated energy: the string playing, especially, surged. While the Allegretto took a few bars to settle into the tempo, it snapped impressively when it did; the unison refrains for the woodwinds were biting.

After a false start, there was an exceptional focus to the Largo: here, I think, Ben, the orchestra, and the audience were really feeding off of one another, so viscerally attentive were all who were present in the theater. The consolatory final cadence – an F-sharp-major triad coming after so much Sturm und Drang – and played beneath a perfectly clear Greek night sky, was an experience unto itself. 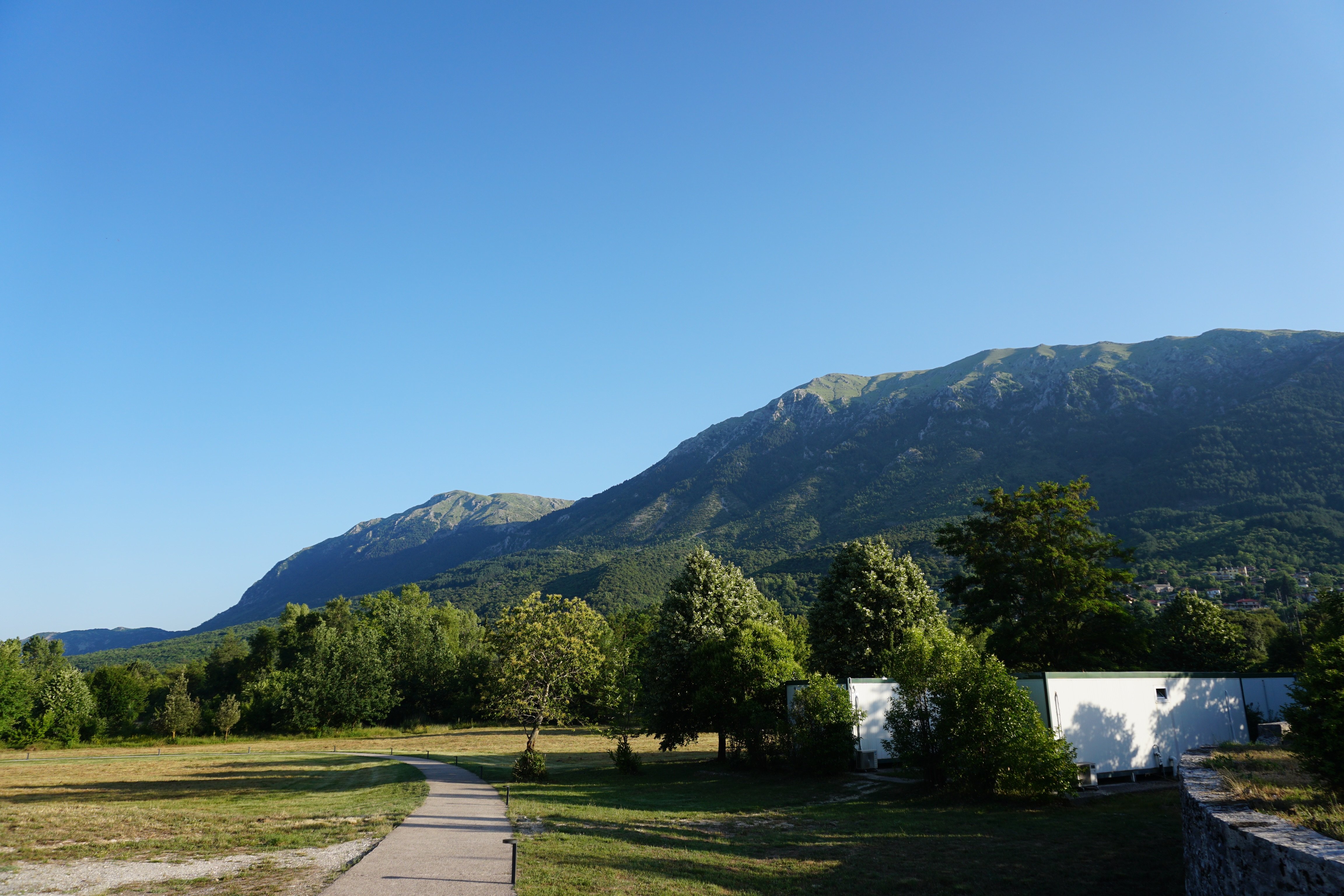 Some of the hills surrounding the Ancient Theater in Dodoni.

After the finale (mightily done and, as always, closely adhering to Shostakovich’s metronome markings), the audience replied with a long, lusty ovation. Perhaps one shouldn’t read too much into it (the stone seats were unspeakably uncomfortable – they almost made one long for the old pews of Sanders Theater – and the night air quite chilly), but, given the exceptional nature of such things in Europe, it’s worth noting that Tuesday’s crowd was quick to its feet.

Following an affecting “Nimrod” encore, we then trooped off to an al fresco dinner at a nearby taverna which was capped by an excellent dessert of fresh fruit (the melon in this country is outstanding) and a 2 a.m. departure for our hotel. As usual, nobody complained about the hour (actually, a number of players simply fell asleep on the bus; some did the same in their seats at the restaurant), but Wednesday’s schedule was appreciably lighter: a free morning, lunch on a nearby island, and then a quiet afternoon with dinner at the hotel at the unheard of (on this tour) hour of 7:30!

The quiet schedule, though, won’t last. On Thursday we’re off to Delphi and then Patras for the last two concerts of the trip. Time, indeed, flies – as the Dodoni theater, if it could speak, would surely tell us.