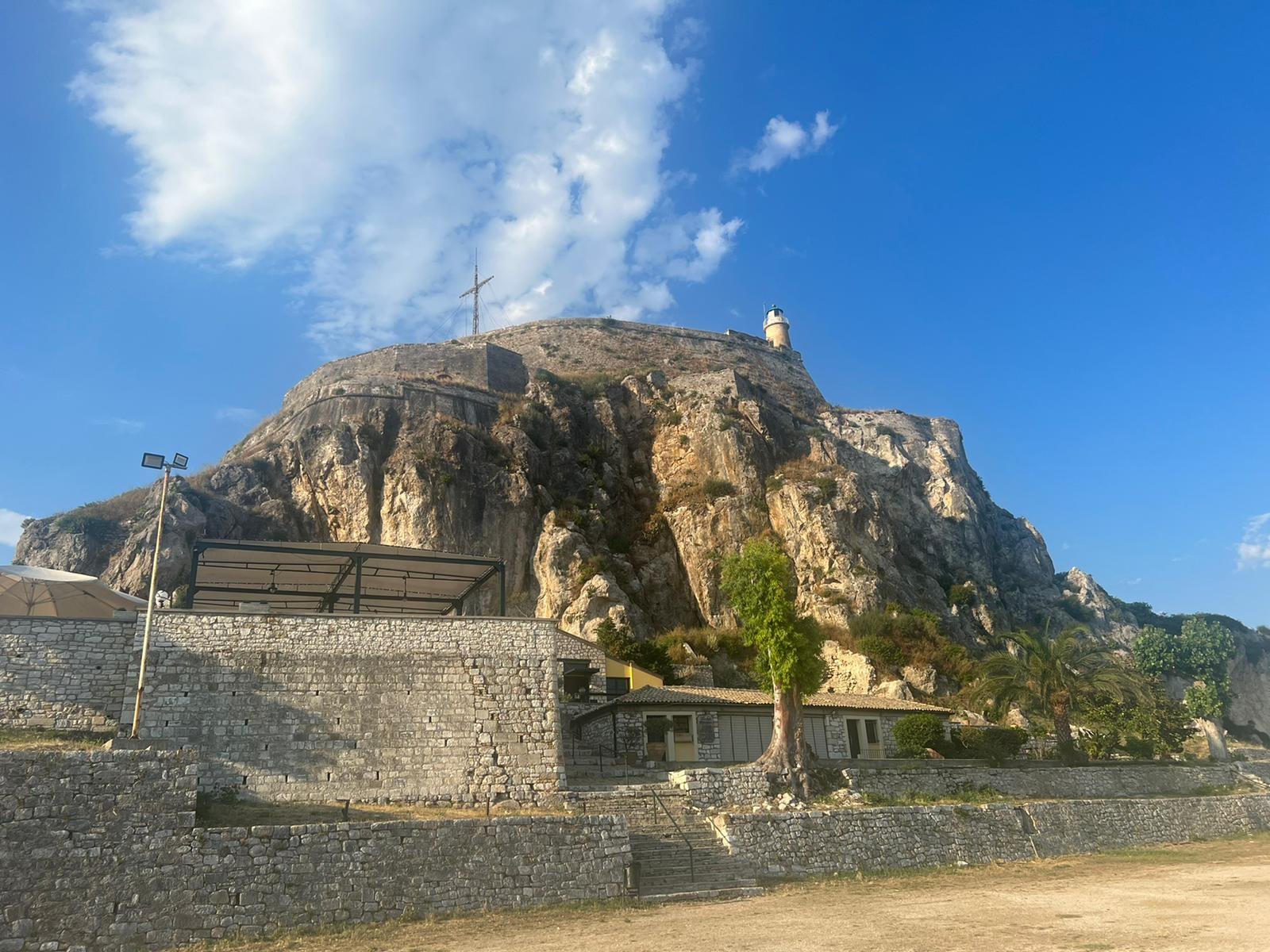 The Old Fortress in Corfu.

One of the perks of traveling with the BPYO while they’re on tour is that, in addition to getting to go to lots of exciting places, you get to hear the ensemble play a number of events – concerts, masterclasses, side-by-side exchanges – in close succession. In Boston, during the season, the group rehearses each Saturday but, otherwise, only gives three or four concerts in the course of the year and those are usually spaced out by a couple of months.

Here, when everything is crammed into two weeks, the intensity of the music making, already at a high pitch in normal times, is commensurately ratcheted up. What, in practical terms, that means is that, as the tour proceeds, the orchestra’s playing typically grows both more secure and more free: concert to concert, there is a greater degree of trust evident between members of the group as they interact onstage, as well as a flexibility to their performances. (This also reflects, of course, an ever-increasing understanding of and comfortability with the complexities of the repertoire at hand).

When I went with the BPYO to Brazil in 2019, it was probably the third concert before things really started to gel like this. I think that’s probably the norm. On our current trip, though, the process is already far advanced. It was evident in the Thessaloniki performance, where, despite a stuffy venue (the air conditioning was, evidently, not working), the BPYO delivered a Mahler Fourth of incredible naturalness and feeling. And the process continued at our next stop in Corfu. 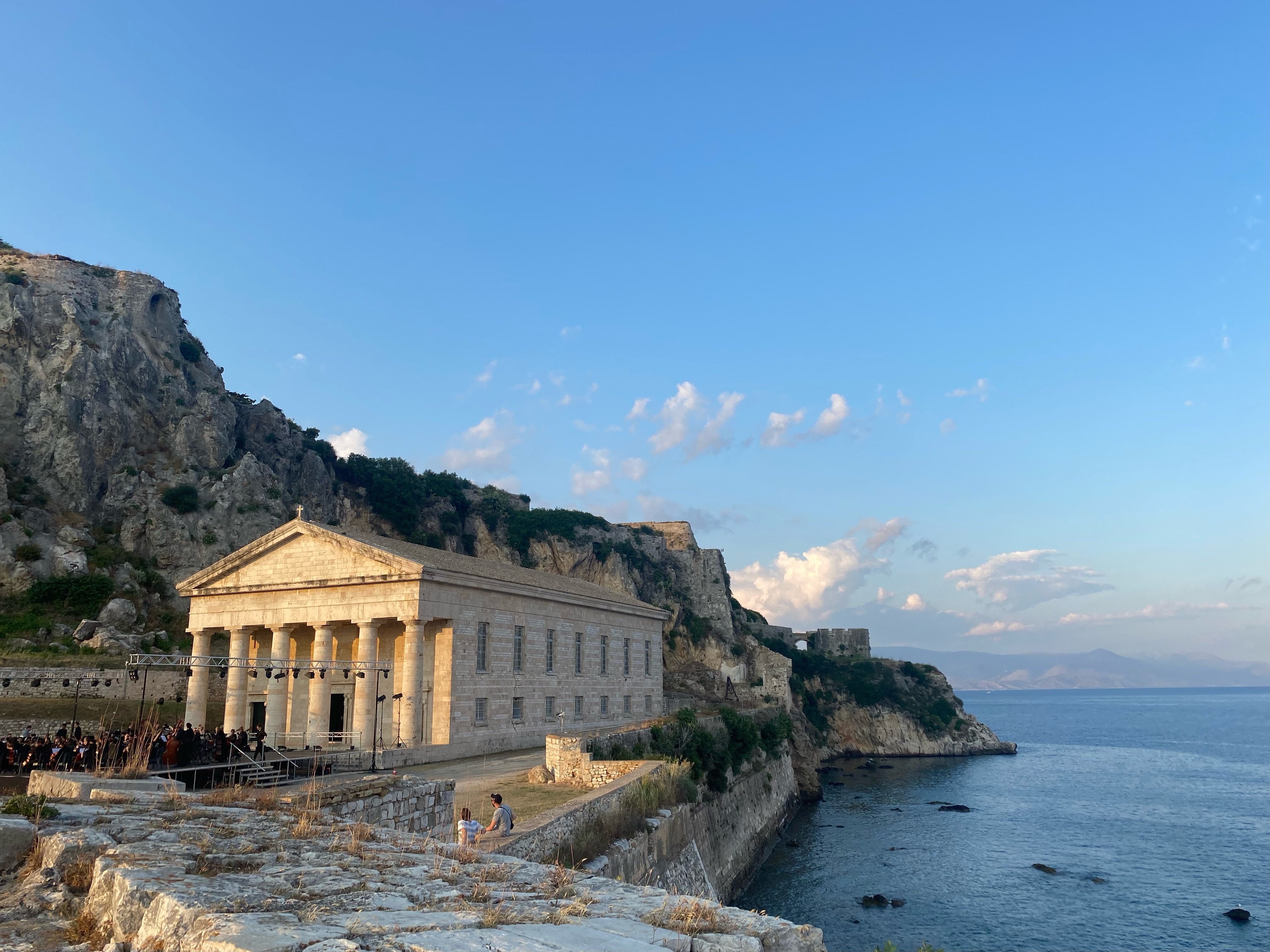 This was our first outdoor concert of the tour, in the plaza in front of St. George’s Church, located just below the Old Fortress that juts into the harbor of Corfu city. In many regards, it’s an unideal place to play a symphony concert. Corfu is a busy vacation destination; there’s an airport nearby; ever-present traffic on the streets; a bustling Old Town; and competing musical sounds from nearby bars, restaurants, and – as we discovered at one memorable juncture during a solo Bach encore – party boats.

What the spot lacks in peace and absolute quiet, though, it makes up for with stunning visuals. The pictures below can, I think, do more justice to this aspect of the experience than my words, but let’s just say it was an inspiring square in which to perform. 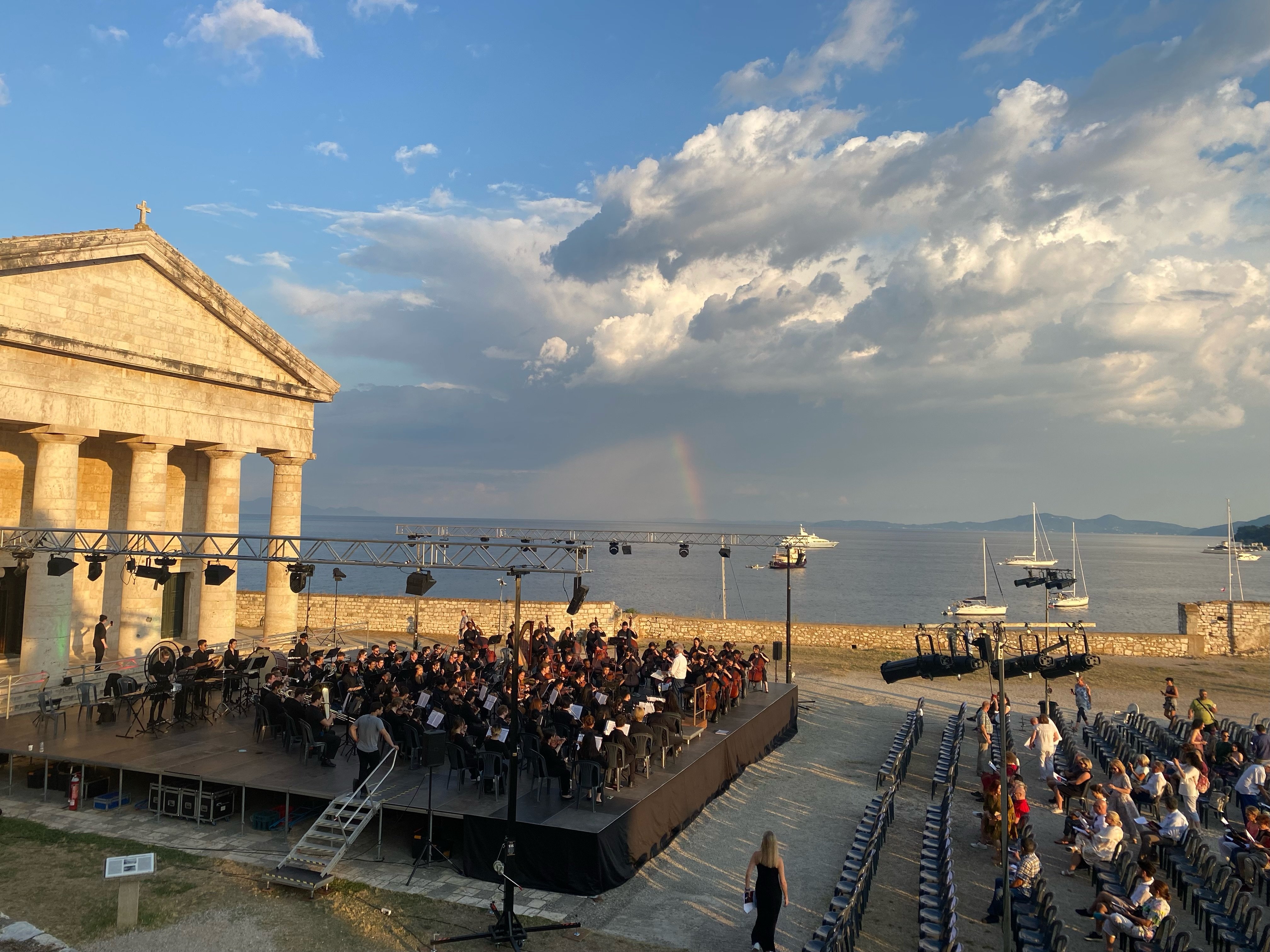 The BPYO’s sound check for Sunday’s concert, with a rainbow in the distance.

Acoustically, too, the setting was more than adequate. Sure, there were some distractions and some instrumental details got lost in the night air. But the orchestra’s sound carried beautifully across the space – and so much that was important did speak.

This was very much the case with Shostakovich’s Festive Overture. The night’s boomiest fare, Sunday’s account was, by turns, vigorous and lyrical. If you stood far enough back in the plaza, you might have caught the brass fanfares echoing off the stone walls; none of that fazed the orchestra, though, whose rhythm and ensemble were consistently tight.

The Tchaikovsky Rococo Variations require a certain unanimity, of course, but there’s also room for some expressive freedom for (mostly) the soloist but, sometimes, the orchestra, too. In this instance, the piece didn’t just flow; rather, it seemed to float – but with a good deal of direction and zeal – and this despite some unfortunate extraneous sounds, the highlight of which (if we can call it that) was an airplane taking off just as the cello cadenza before the seventh variation faded away. 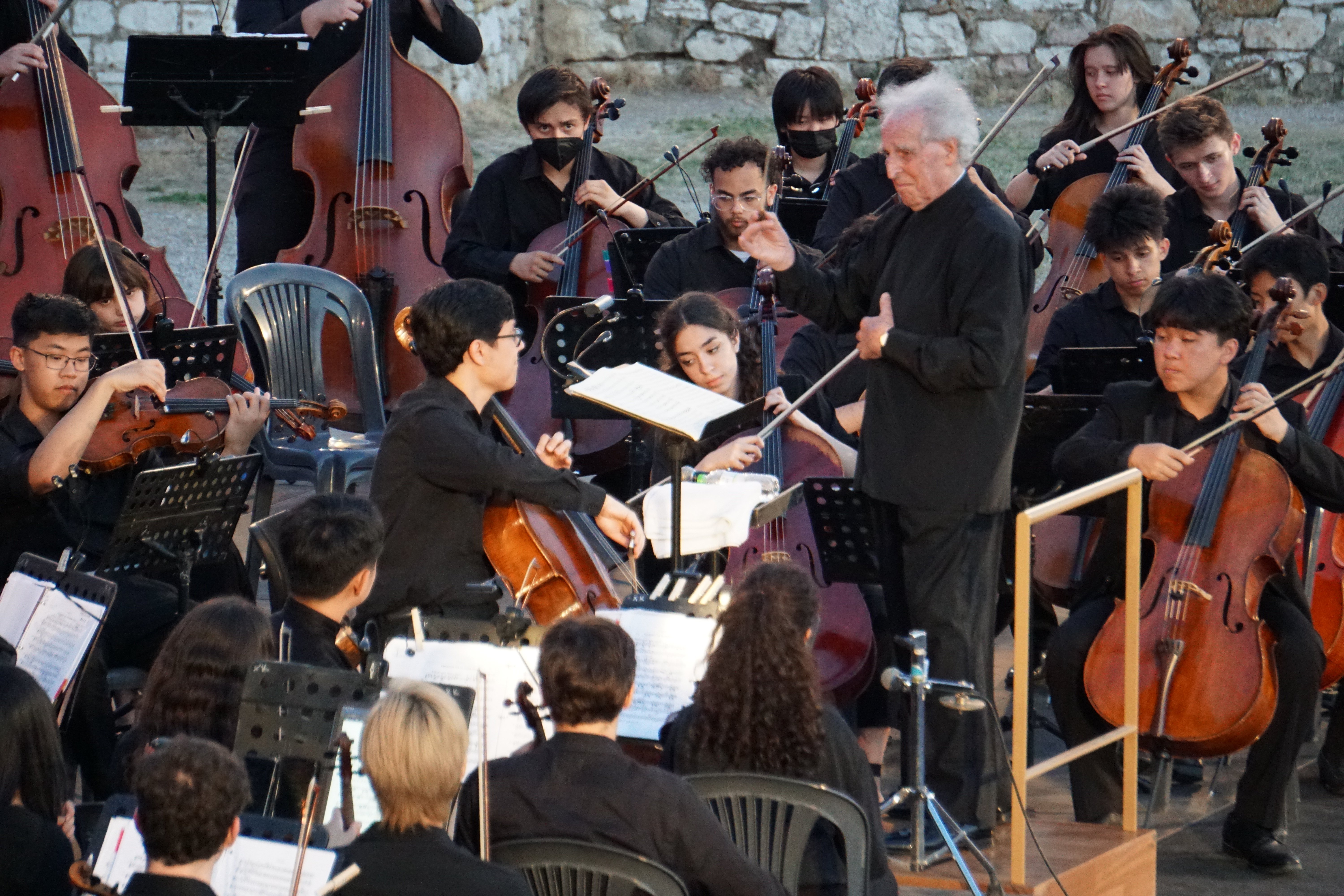 Yet, again, none of this really mattered because the performance was so locked in. It’s been a real delight to hear and talk to Zlatomir Fung a little bit these last days. He’s a brilliant cellist – as we could hear exceptionally well, since he was discreetly miked for Sunday’s performance – but an even finer person: smart, humble, generous, funny. He and the orchestra have a wonderful rapport; Zlatomir’s playing clearly brings out their best: they listen closely and respond to him, with orchestral soloists and even sections (especially in the woodwinds) taking the initiative to echo and imitate the solo part and vice versa.

Their reading in this Tchaikovsky did just that and to a notably greater degree than a couple of days ago in Thessaloniki, with the quicksilver exchanges in the gossamer fourth variation and the lovely duets between oboe and cello in the seventh standing out for their excellence.

Then came Mahler Four. Of all the composers (and pieces) that probably shouldn’t be played outdoors due to the delicacy of their orchestration, this pairing is at or near the top of the list. Yet (again) of all the major composers in the canon, none loved the outdoors more than Mahler, so, perhaps, there’s a certain appropriateness to playing his music under the stars?

On Sunday it felt that way: whatever might have been lost in the ambient noise or the plaza’s reverberance was more than compensated for by playing that was amazingly natural and supple. Ben Zander told me afterwards that he felt he could ask the orchestra to make even the most subtle adjustments and that, on this night especially, the BPYO responded with uncommon immediacy. 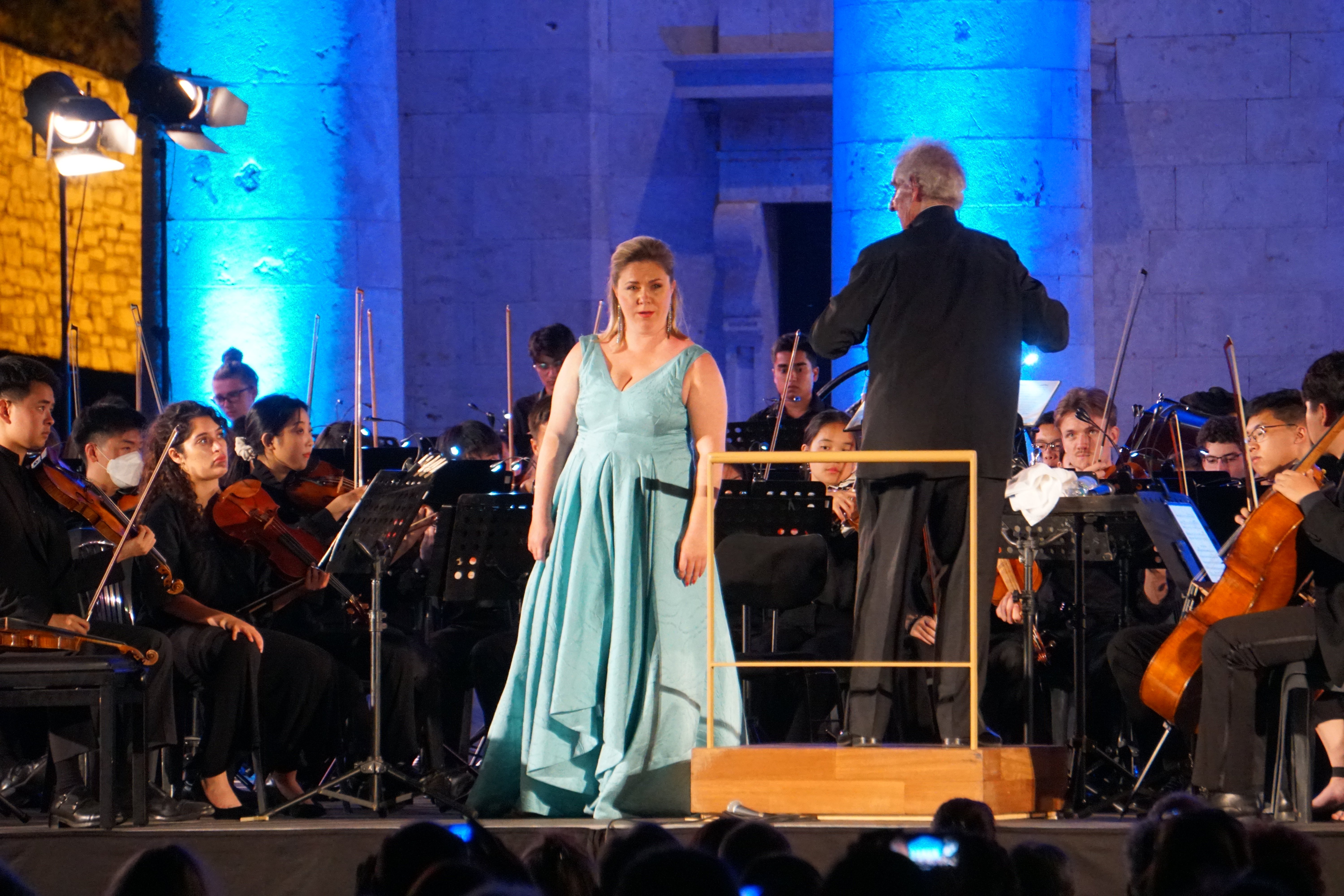 Soprano Sofia Fomina singing the finale of Mahler’s Fourth Symphony with the BPYO in Corfu.

One could hear that from the floor (or, for some of us, the walls) of the plaza. As in Thessaloniki, the first movement moved smartly and was mightily shaped.

I praised concertmaster Eric Chen’s second-movement solos in the last entry and I’ll do it again here: no violinist I’ve heard, either on record or in concert, captures the sneering character of these solos nearly so well as Eric has in the three times (so far) I’ve gotten to hear him play the piece. There are a handful of scherzo-like movements in Mahler that I’ve often held at arms length – they seem to delay the action of the bigger, more exciting movements upcoming – but his solos this year have really converted me on this movement’s importance in the Fourth’s overarching trajectory.

As for the rest of it…well, there’s something about being able to listen to the Poco adagio while looking up into the warm, night sky of Corfu and see, if not stars (though, at one point there was a drone hovering high above us), then the flashing beams of the lighthouse atop the Old Fortress and the various yachts bobbing in the harbor. It’s a rather intoxicating combination, especially when the soundtrack is rendered with such sensitivity and color as on Sunday. 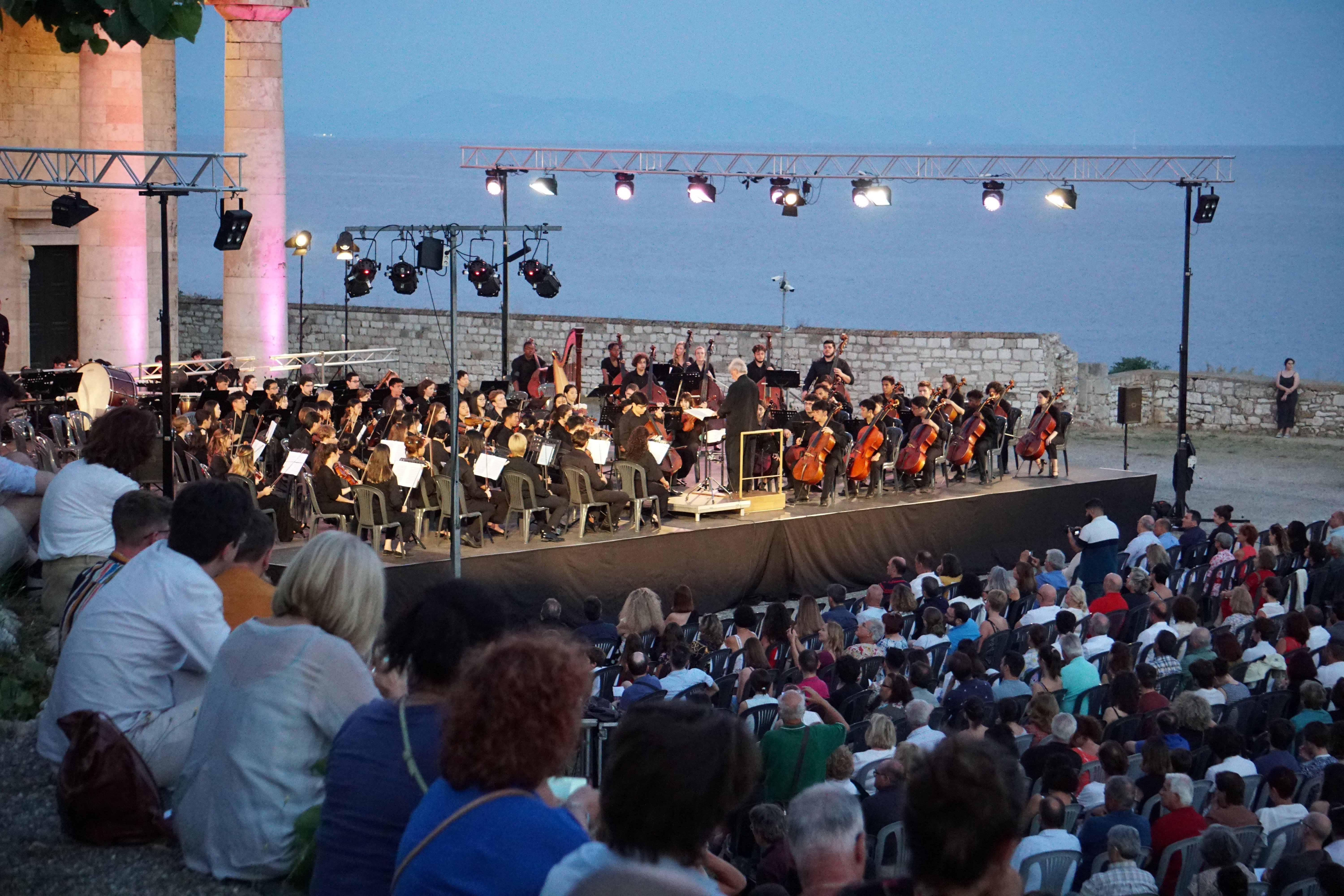 An attentive crowd, in the seats and on the walls, listening to the BPYO in Corfu.

The finale was beautifully sung, sounding, as with the rest of the piece, even more elastic than in Thessaloniki. It’s truly a privilege to get to hear Sofia Fomina have fun with this text and to experience the orchestra responding to her with increasing confidence, as they did especially well in the ironic depictions of animals being led to a heavenly slaughter.

Our audience, which filled the 800 seats set up before the stage and included another 400-500 sitting on the surrounding walls and rocks, responded with vigorous enthusiasm. We’d been told something of how appreciative Corfu locals are for live music and they demonstrated as much, with a concentration that was palpable. It wasn’t even broken when, in the second movement of the Mahler, an audience member had a medical emergency and an ambulance drove into the crowd (siren off, mercifully), removed him, and then exited the premises (again, sans siren).

Taken together, the combination of performance, audience, and venue was unforgettable. Later on, Ben said he thought it was one of the pinnacle nights in the BPYO’s ten-year history. I’ve only been following the group regularly since about 2015, but have no grounds for disagreement – it was a great evening.

Perhaps not so transcendent but a lot of fun was the next afternoon’s exchange with members of some of Corfu’s philharmonic bands. There’s evidently a long tradition of (mainly) brass and wind bands on the island – today, we’re told, there are several hundred of them – and a group of about forty Greek musicians joined with the BPYO to read through several pieces inside St. George’s Church.

The BPYO’s exchange with musicians from the Corfu Philharmonic Bands.

One-hundred-and-sixty people playing instruments inside a 19th-century church made of stone is, maybe, not the best idea: it makes quite a din (Hector Berlioz, no doubt, would have loved it). I didn’t stick around inside for the whole thing – let’s just say that standing behind a brass section that includes eight trombones and two tubas playing The Stars and Stripes Forever isn’t for the faint of heart – but a wonderful time was clearly had by all; afterwards an impromptu jam session among brass players from both groups and a flautist from ours brought the gathering to a joyous close.

Believe it or not, despite all the busy-ness of playing music in Corfu, there was still plenty of time to enjoy the town and its surroundings. Many of the guides who have been traveling with us have ties to the island, so they made a point of showing us the best of what it and its cities have to offer.

Our hotel was about two miles from the Old Town of Corfu, which is a riot of colors, shops, narrow passageways, and humanity – and has the further distinction of boasting some of the finest gelato this side of Heaven. As one might expect, the city and its merchants were a magnet for many from our group, as were several of the local beaches. 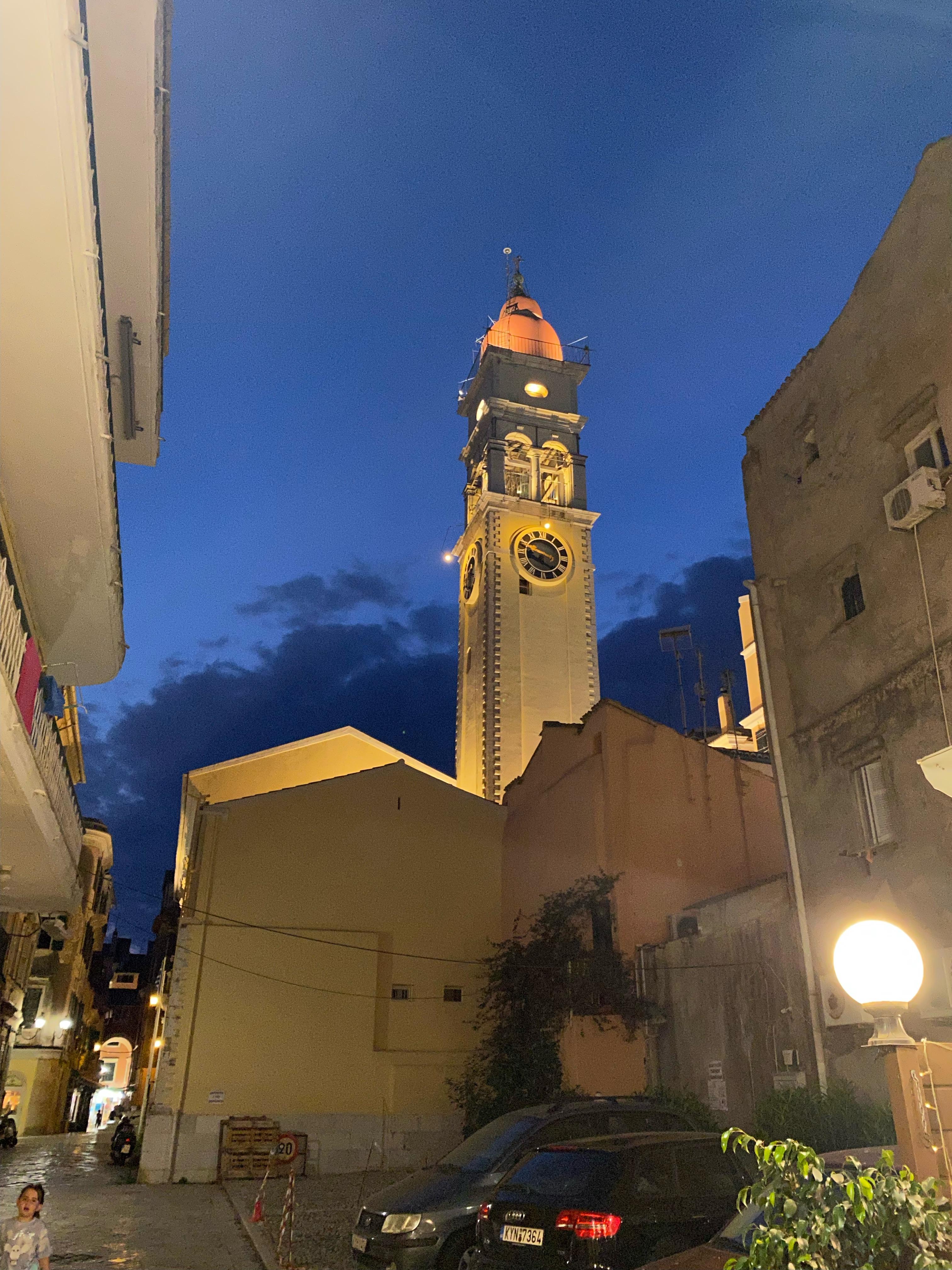 The spire of St. Spyridon Church, one of Corfu’s landmarks, at night.

On Sunday evening, after the exchange, we crossed over to the western side of the island to visit a beach and then headed up to the top of a mountain to have dinner at a restaurant with what was modestly advertised as a “sunset view.” Thanks to atmospheric conditions, the sunset was a bit more of a haze that turned from orange to red to the blue of night. But it was gorgeous all the same. The food at the establishment (it was called “The Golden Fox,” in case you’re ever in the area) was exceptional. And the bus rides there and back were awe-inspiring. 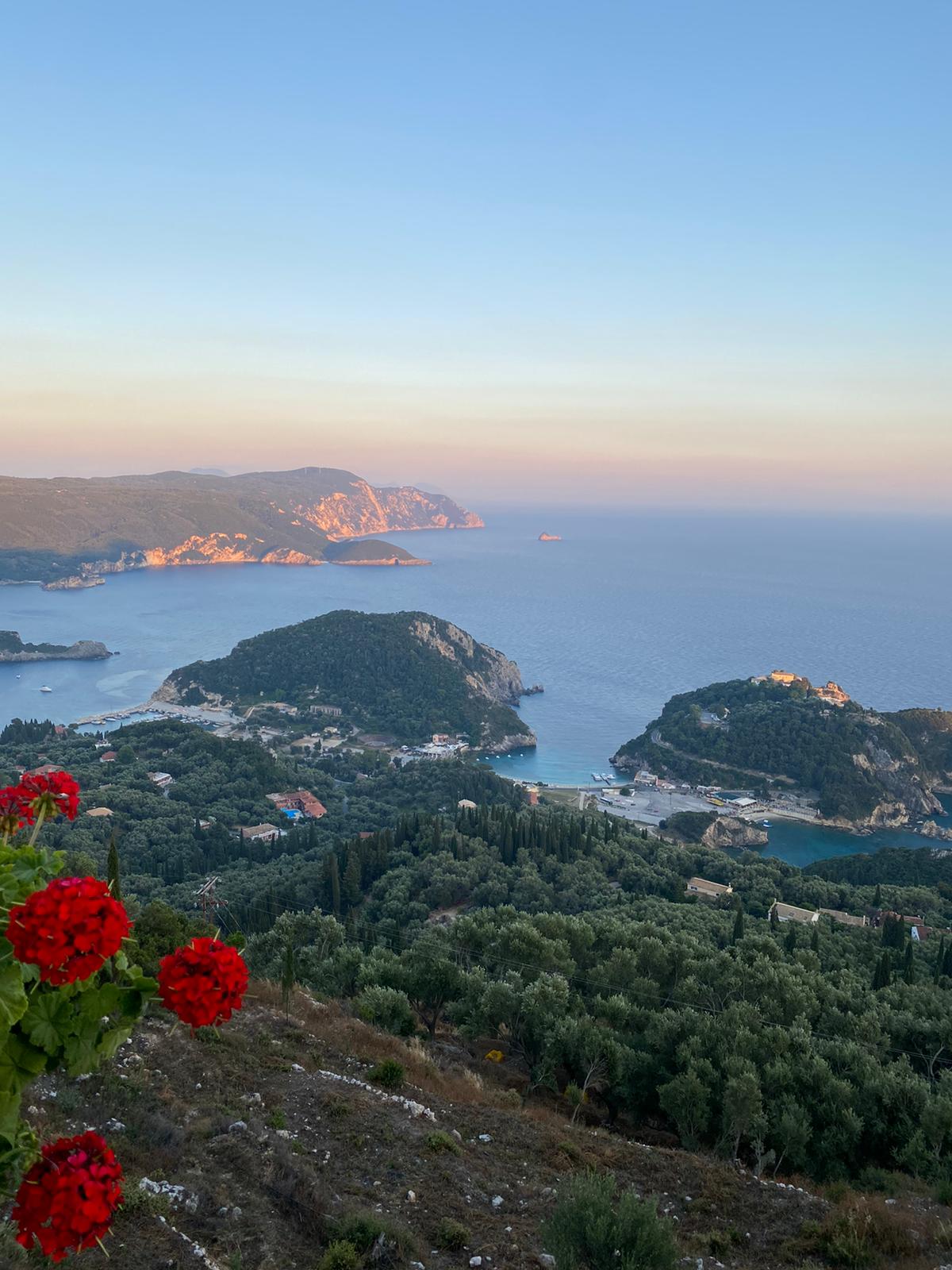 I won’t go into all of it now, but, just as Zlatomir Fung and the players in the BPYO are masters of their respective instruments, our bus drivers are virtuosos of the road, capable of parallel parking a bus in Athens (yes, that has been done) just as coolly as they navigate impossibly sharp switchbacks and thread through the narrow alleyways that pass for streets in these high-lying villages in Corfu. They’re also (like the above-mentioned musicians) great team players: two of them literally chased after (as in ran down the street behind) the third bus after it went down the wrong road in one of these towns coming back from dinner. I’m still not sure how they managed to turn the thing around – but here we all are again, ready for the whirlwind of the last three concerts of this increasingly unforgettable Greek tour.