They say it takes about three weeks to make a habit. Whether or not it does (and apparently that timeframe might be a myth – but Greece is a land of myths, right?), it’s safe to say that, by about day ten of a two-week-long tour, a feeling approaching routine sets in. One gets, if not pretty good, then at least fairly competent at living out of a suitcase, packing up in the morning, trekking down to the buses, loading up, going on to the next place, unloading, settling in, and ending the day with a concert in a new venue. 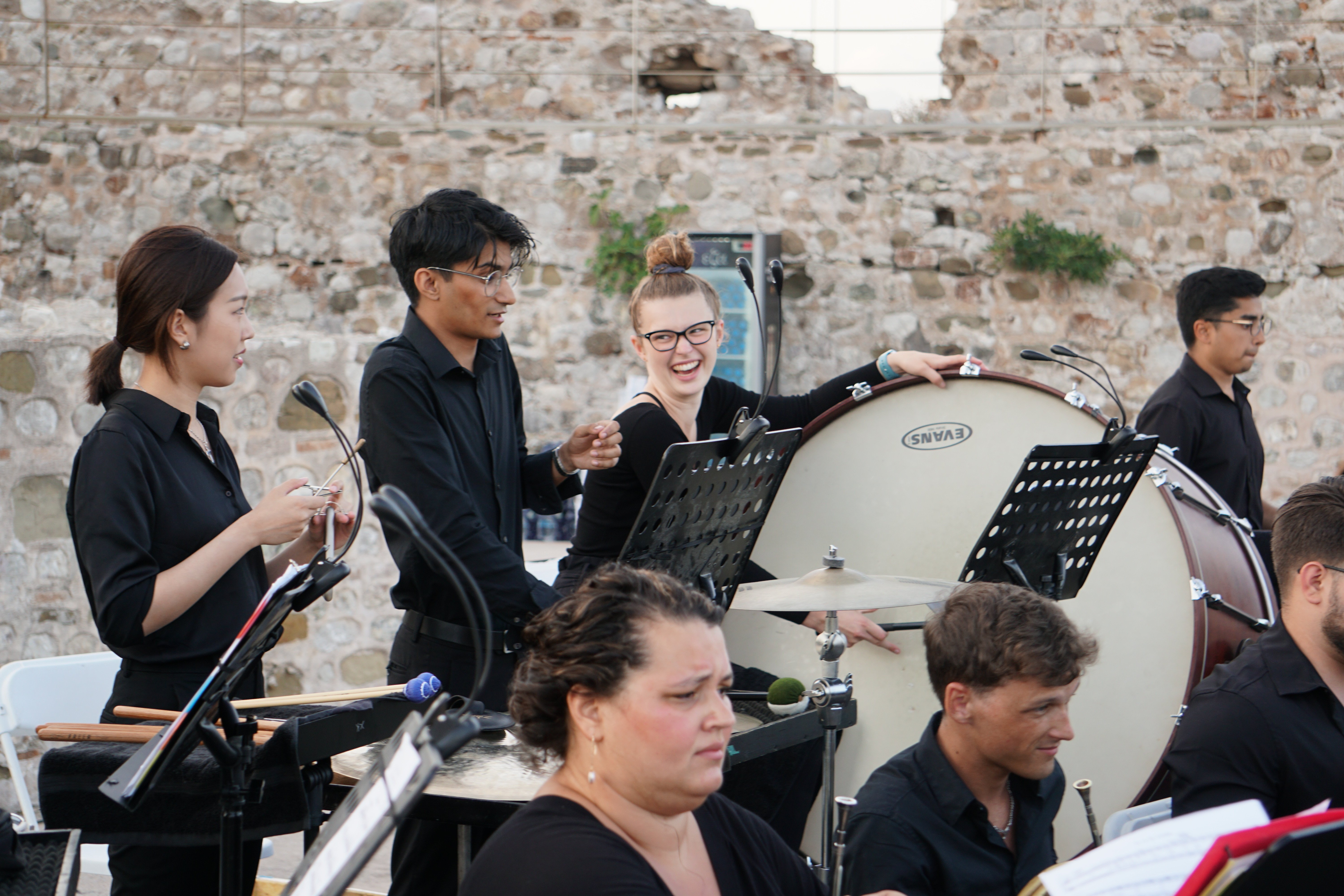 We certainly got a lot of practice doing this over the last fortnight in Greece. Indeed, no sooner were Friday’s concert and dinner in Delphi finished than breakfast rolled around and the BPYO hit the road again for the last stop of our trip, Patras.

Like Corfu, Patras is one of Greece’s more European cities. After Athens and Thessaloniki, it’s the country’s third-largest metropolis and the capital of Western Greece. We’d actually driven past the place on the way to Delphi on Thursday: there’s a spectacular bridge there – think of Boston’s Zakim Bridge on steroids and you’ve got a picture of Patras’ Rion-Antirion Bridge – linking the city (and, from there, the Peloponnese) to the Greek mainland. Situated at the confluence of the Gulf of Corinth and the Gulf of Patras, it’s strategically-located, as our venue, the Rio Castle, reminded the historically-minded among our number.

For sheer variety, I’ve never been on any trip that’s offered a wider array of concert sites than this one (our lead tour manager, Georgia Kardaki, told me before Saturday’s concert that “we don’t want you to be bored while you’re here.” Well…mission accomplished). There was certainly no risk of ennui this last week. Corfu provided us a stunning urban setting, Dodoni an ancient one, and Delphi something Edenic. Fittingly, Patras’ Rio Castle was a thing unto itself. Sandwiched beneath that eye-catching bridge and the city’s harbor (in particular, the ferry landing on the East pier), it’s a striking construct originally built by the Ottomans in 1499.

However, it’s anything but a nice quiet spot. 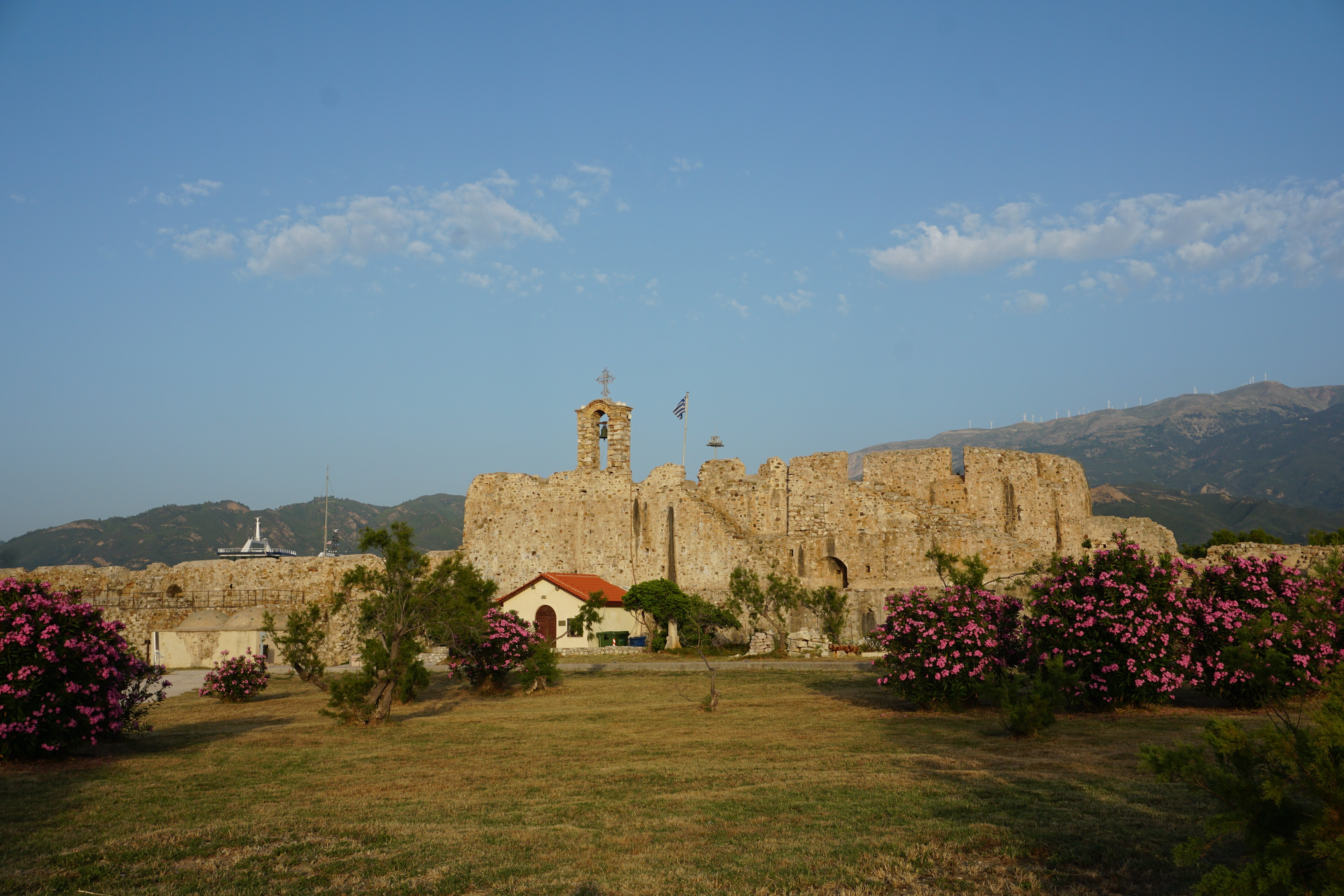 The interior of Patras’ Rio Castle.

Because of this, Saturday’s final concert was possibly the tour’s most challenging from a listening perspective. Even more than in Corfu, the program (in particular La valse and the Elgar Cello Concerto) was in competition with the city’s traffic. During the first movement of Shostakovich’s Symphony No. 5 a ferry announced its presence with a loud horn blast (the pitch was, amusingly, about three-quarters of a tone north of the root of the chord the orchestra was playing at the time) and, later on in that movement, somewhere in town a fireworks show commenced. Another round of fireworks accompanied part of the second movement.

On top of all this, depending on where you were sitting, the orchestra’s sound didn’t always carry very well. For most of the evening, I was towards the back of the square, a bit removed from the stage and, since there was no shell or surface to help push the orchestra’s sound outward, most of the evening’s efforts simply seemed to go up. But I have it on authority from several others in our group that, from different vantage points in the place, this was one of the clearest performances the BPYO delivered in Greece. Go figure. 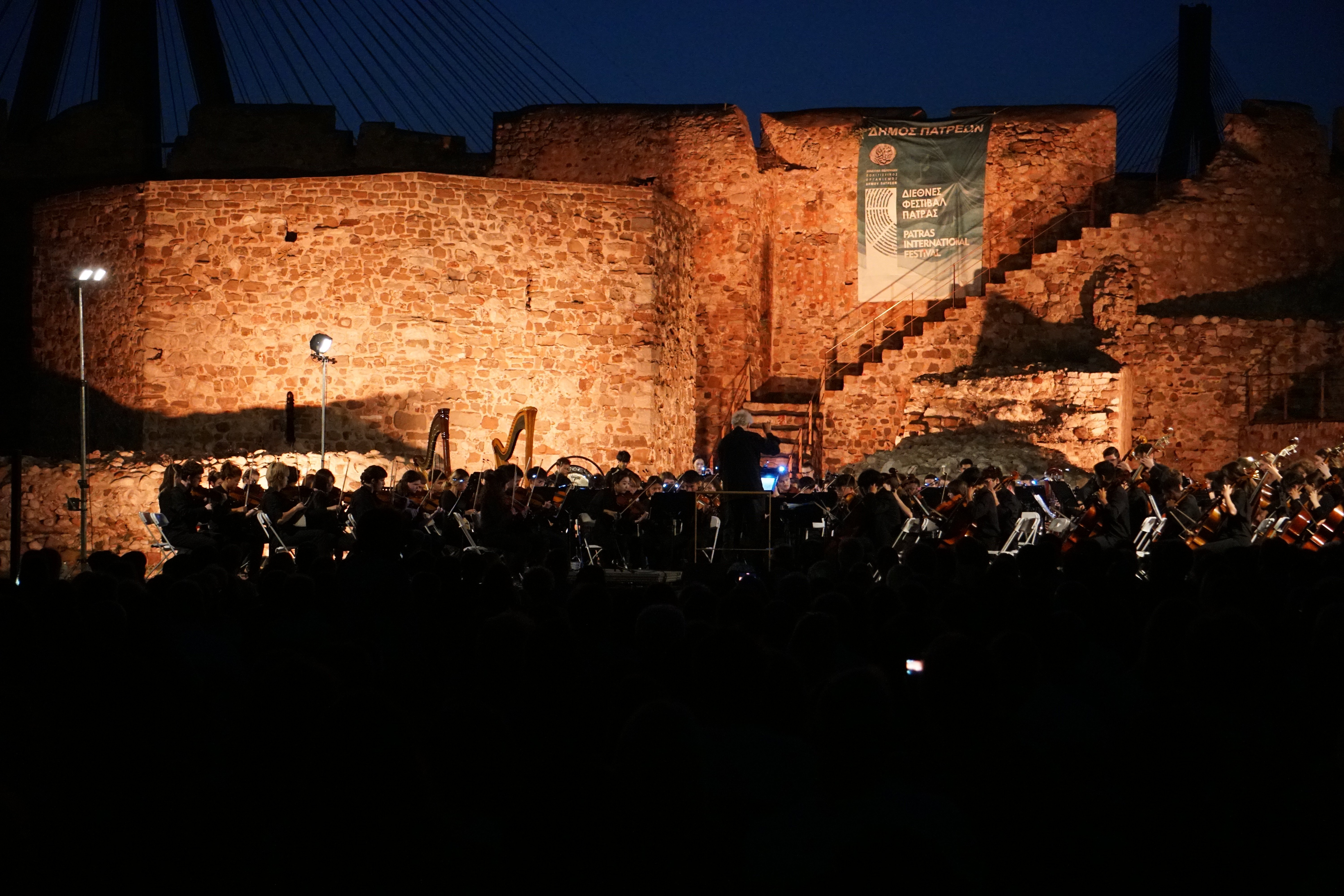 Regardless, none of the sonic issues I noticed seemed to bother the audience, including in my section, in the least. As has been the norm for our concerts in Greece, Saturday night featured yet another capacity crowd, with all 800 seats in the Castle’s plaza filled and several hundred more folks sitting on its lawn and along the walls. They were of all ages, deeply involved in the proceedings, admirably quiet, and vigorously responsive.

The crowd’s enthusiasm for La valse was palpable: despite the constant hum of tires and throttling of truck and motorcycle engines on the nearby highway, the larger piece was invested with plenty of energy.

The Elgar was, too. This was just the sixth time Zlatomir Fung had played this Concerto with an orchestra, yet the leaps he’s taken, interpretively, with the score over the last seven months are extraordinary. On this night, I missed the wonderful blend of the Athens performance and even the interesting, if not totally satisfying, balances from Dodoni. 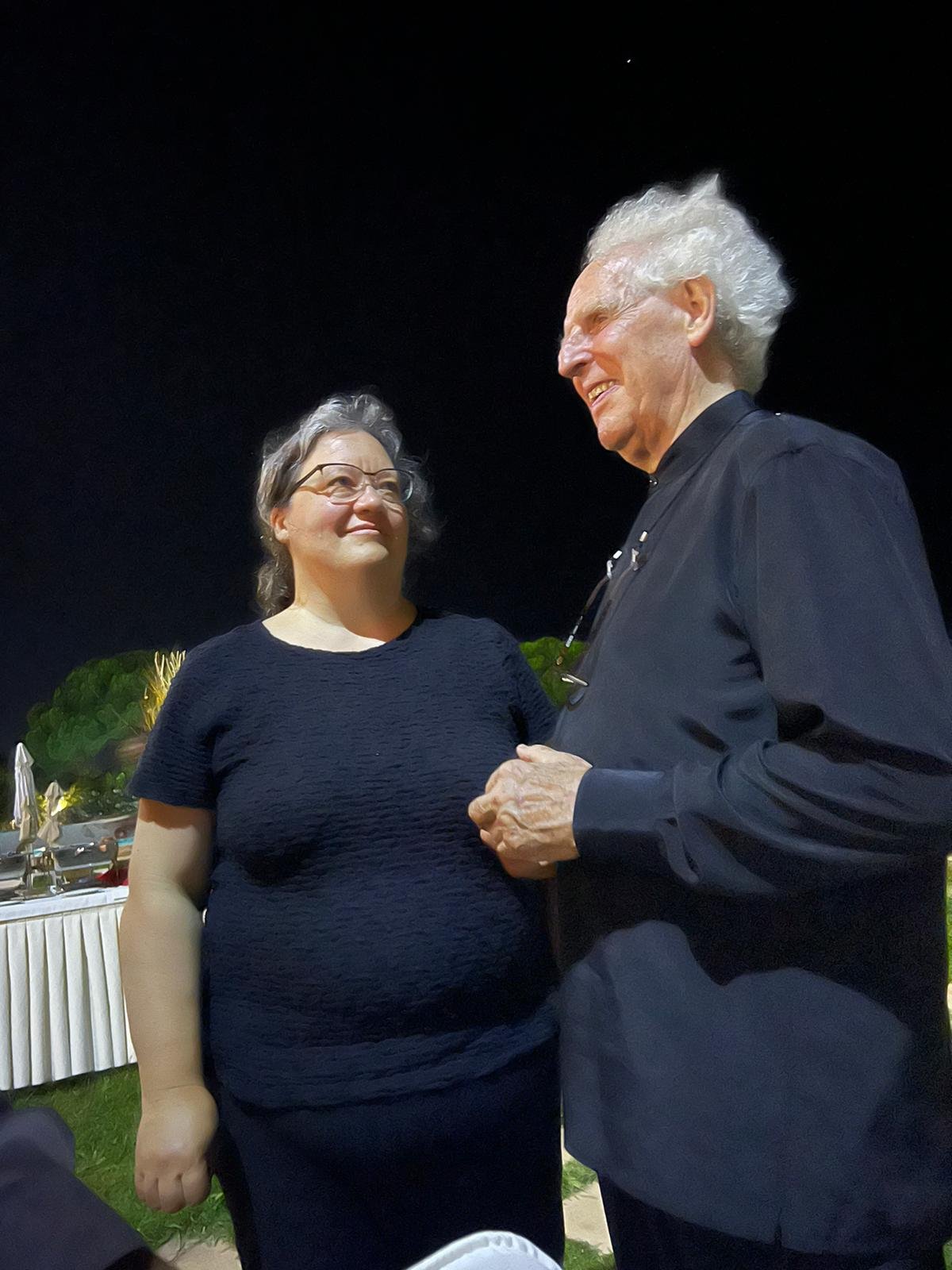 However, what came out here, and it was just as memorable as anything from those concerts, was Zlatomir’s captivating rapport with the BPYO – he’s bonded with the group, especially the ensemble’s younger members, beautifully this trip – as well as his physical engagement with the music. Afterwards, he was joined by the first two stands of the cello section for an encore of Elgar’s Salut d’amour.

Following a short intermission, Shostakovich’s Fifth filled the space altogether more satisfyingly. The first movement’s melodic lines – especially the big, exposed viola section solo around the middle – sang plaintively. There was no rushing to be had this time in the sardonic second movement, while the Largo unfolded with a good degree of color and, miraculously, a minimum of extraneous distractions. Meantime, the finale, though a touch violin-heavy, drove, its central, mysterious harp melody floating beguilingly.

After that came the usual encore of Elgar’s “Nimrod” – somehow it glowed rightly, despite all the place’s acoustic difficulties – and then the concert portion of the BPYO’s 2022 tour to Greece was over.

The night wasn’t quite through, though: we had a final midnight dinner, with appreciative comments from Ben Zander to the orchestra, Zlatomir and Sofia Fomina, and the tour’s staff: chaperones Derek Beckvold, Debbie Ramsay, Kysha Bradshaw, Rosie Conway, Mirna Osman, Isabel Carton, Mira Williams, and Greta Myatieva; our intrepid medical team, Peter and Maryanne Sheckman; Johan van Zyl, our tour director from Classical Movements, the company that arranged the trip; our Greek tour managers; and the BPYO’s indefatigable manager, Elisabeth Christensen. 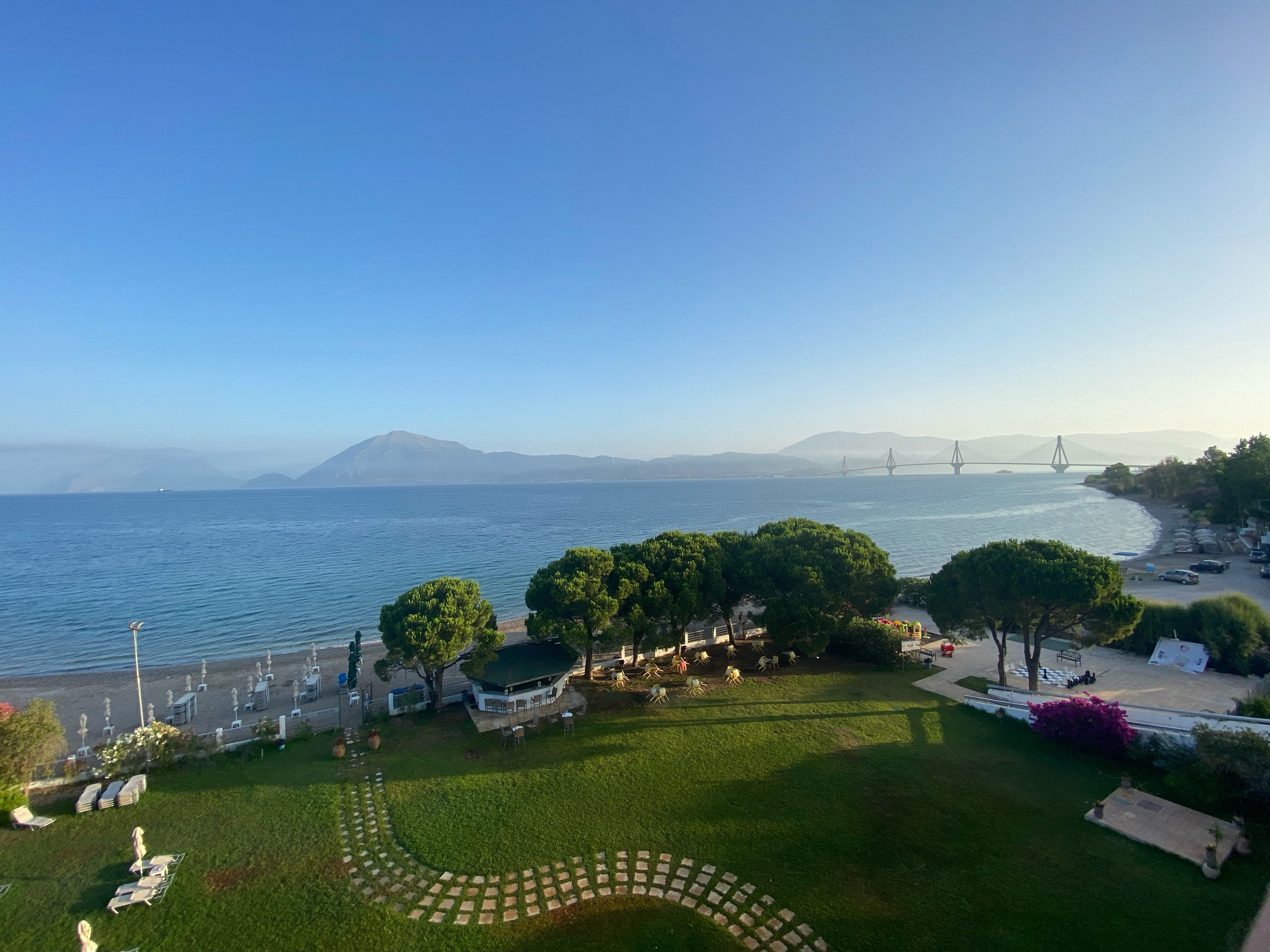 The view of the Gulf of Patras and the magnificent Rion-Antirion Bridge from the BPYO’s hotel on Sunday morning.

The cheers for all were, at Ben’s request, modest – they began around 1:15 a.m. and our hotel was full of sleeping guests – but heartfelt. Suffice it to say, this was a great crew, young and older, with whom to travel around Greece. After the meal, we disbanded to sleep, celebrate, pack, and/or otherwise prepare for the morning’s return flights to Boston (the first bus to the Athens airport left at the ungodly hour of 5:45). And that, as they say, was that: the three-and-a-half-month-long whirlwind of planning, fundraising, rehearsing, anticipating, and executing the BPYO’s 2022 tour of Greece came to its triumphant conclusion.

Now for the big question: what is one to make of the whole thing? Well, that’s a discussion to be had, but I think it needs to wait a day or two, once – for the second time in a month – a seven-hour time change has been conquered and then some proper processing can be done. Stay tuned.