Zander and Boston Philharmonic take on Shostakovich and Beethoven 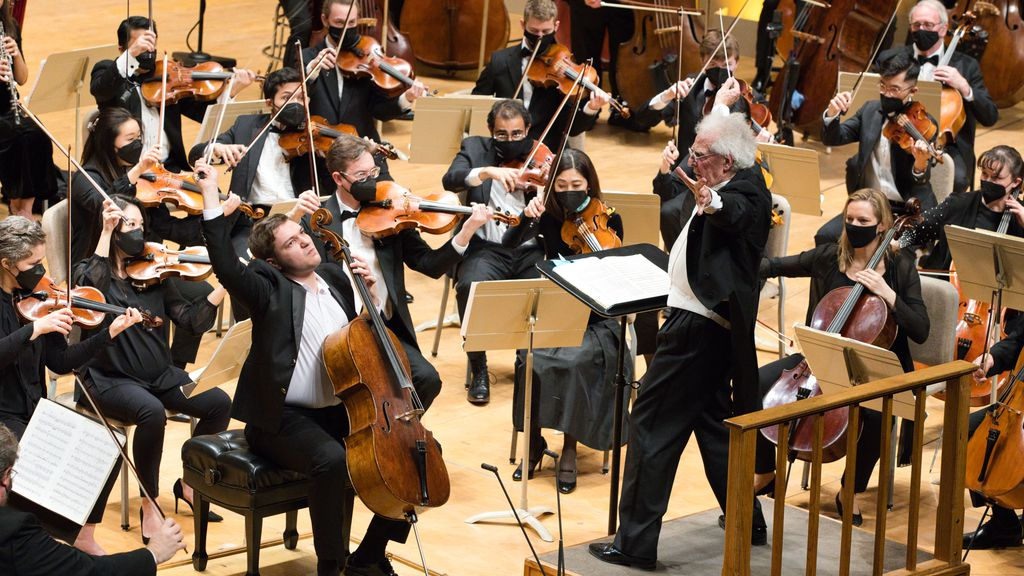 At Symphony Hall on Sunday afternoon, Benjamin Zander led the Boston Philharmonic in its third program of the season.

For a cold and icy Sunday afternoon during a pandemic, the crowd that turned up at Symphony Hall for the Boston Philharmonic’s third program of the season was robust in size and spirit. There were a notable number of children in the audience as well as listeners clutching bouquets no doubt destined for family members onstage. Founded in 1979 by Benjamin Zander, the Philharmonic combines professionals, amateurs, and students, and remains a fixture of the city’s music scene.

Sunday’s program began with an all-Russian first half featuring music by Shostakovich and Mussorgsky — the latter represented by the Prelude to “Khovanshchina.” Brief in length, mellow in tone, and beautifully atmospheric in its illustration of dawn over the Moskva River, the work made for a lovely curtain raiser and a welcome change from the school of fizzy ebullience that more often dominates this spot on programs. In Sunday’s well-shaped account, the score’s opening pages also provided ample opportunity for the Philharmonic to showcase its accomplished woodwind principals: Rane Moore (clarinet), Lisa Hennessy (flute), and especially, Peggy Pearson (oboe).

Shostakovich’s music was represented by the First Cello Concerto, here given a poised and technically accomplished performance by the young Romanian cellist Andrei Ioniță. A gold medalist at the renowned Tchaikovsky Competition, Ioniță plays with a clear tone and sensitive musicality, and is notably graceful in his instrument’s highest registers. His reading of Shostakovich’s darkly electrifying work of 1959 drew a heartfelt ovation from this crowd, which he answered with lively encores by Bach and Georgian composer Sulkhan Tsintsadze.

For this listener, Ioniță’s Shostakovich performance would have benefited from another few degrees of heat and conviction. Flashes of it were present in the first two movements, but the more sustained incandescence he brought to the work’s final paragraphs made me wish we had heard more of this in other places, selectively, throughout.

After intermission, Zander led the orchestra in an compellingly vigorous performance of Beethoven’s “Eroica” Symphony. For years the conductor has attempted to puzzle out Beethoven’s metronome markings, which are so notoriously perplexing that many interpreters don’t even bother. For this performance, Zander took a more flexible approach than he has in the past, often siding here with the brisker spirit of the historically informed schools while leaving himself the option of a rubato freedom more associated with the old-school Romantic approach.

The push and pull ultimately suited this music’s own combination of dignity and revolution. The outer movements and the scherzo zipped along, at times with crackling intensity, without ever tipping over into breathlessness, while the storied “Marcia funebre” benefited from a genuinely march-like rhythmic clarity. Zander of course is also known as a tireless champion of Mahler’s music, and listening to this slow movement, one couldn’t help but think of the conclusion of the latter’s Ninth Symphony. Both feature a radical gesture of composed disintegration, and in both cases the music haunts us by gradually resigning itself to a silence that represents its own ending, and the idea of ours.

Click here to listen to an interview on Beethoven’s Symphony no. 3.