Boston has never been an Anton Bruckner town. The BSO’s music directors, with the exception of Erich Leinsdorf and William Steinberg, have not registered as avid Brucknerians, and the orchestra in its long history has made just two studio recordings of Bruckner symphonies: Leinsdorf’s Fourth and Steinberg’s Sixth. Andris Nelsons’s tenure has brought more Bruckner in Symphony Hall of late, even though he’s recording his Bruckner symphony cycle with his other orchestra, the Leipzig Gewandhaus. But over the past 40 years in this city, it’s Benjamin Zander and the Boston Philharmonic Orchestra who’ve advocated for Bruckner in numerous excellent performances. No surprise, then, that before they began Bruckner’s Eighth Friday at Symphony Hall, Benjamin Korstvedt, president of the Bruckner Society of America, presented Zander with the Society’s Julio Kilenyi Medal of Honor. There can hardly have been a more deserving recipient.

The Eighth, which Hugo Wolf described as “an absolute victory of light over darkness,” constituted a brave choice for the BPO’s first live performance in 20 months. Bruckner’s last completed symphony is one of the longest in the repertoire; only the Mahler Third regularly exceeds it. It’s also one of the greatest symphonies in the repertoire. But Boston doesn’t hear it live very often. Zubin Mehta and the Israel Philharmonic brought it to Symphony Hall in March 2014, in a Celebrity Series presentation. The BSO hasn’t done it in Symphony Hall (or anywhere else, as far as I know) since 1998, when Bernard Haitink led a quartet of subscription-series performances. Zander and the BPO last offered the Eighth in 2010, in Sanders Theatre and Jordan Hall, but I believe this is the first time they’ve played it in Symphony Hall. Friday’s performance wasn’t perfect, but it stormed heaven in a victory of light.

Many Bruckner symphonies exist in more than one version. The Eighth exists in four. Bruckner began working on it in 1884; by 1887, he was ready to send the score to Hermann Levi, the conductor who more than anyone else had championed his work. Levi was mystified by the symphony and, in a state of no little anguish, told the composer he didn’t feel he could perform it. Bruckner was devastated, but in 1889 he began work on a revision which he finished the following year. The Eighth finally reached print in 1892, in a score that Bruckner’s friend and student Joseph Schalk touched up. That same year, the symphony got its premiere from Hans Richter and the Vienna Philharmonic.

During the first part of the 20th century, only the 1892 version was available; it’s what you hear in recordings by Wilhelm Furtwängler, Hans Knappertsbusch, and, as late as 1972, William Steinberg with the BSO, a solid effort that’s available in the BSO Symphony Hall Centennial Celebration box set. In 1939, however, the Internationale Bruckner Gesellschaft’s general editor, Robert Haas, on the grounds that the composer had been unduly influenced by Schalk, produced a controversial hybrid 1887/1890 edition that reinstated some of the Bruckner’s cuts. In 1955, Haas’s successor, Leopold Nowak, brought out Bruckner’s 1890 revision, and then in 1972 he made available the 1887 original.

Of these four versions, the 1892 first published edition has fallen out of favor; it’s not even in print any longer. Working from Bruckner’s 1890 revision, Schalk made subtle changes in instrumentation, adjusted dynamics, filled in tempo markings, and authorized some cuts. Not everything he did appears to have been cleared with the composer, and yet the 1892 score does give conductors more practical help than the 1890 revision does.

The 1887 original has been recorded by, among others, Eliahu Inbal, Georg Tintner, and Simone Young. The most obvious point of difference is the conclusion of the first movement. In the 1887 original, the Allegro moderato ends in 30 bars of triumphant C major. The 1890 revision replaces that with a quiet C-minor conclusion. The Trio of the second-movement Scherzo is reworked; what had been an Allegro moderato is now a Langsam. The changes Bruckner made, with and without Schalk’s help, do not really make the Eighth more conventional or accessible. The symphony remained a mystery to Levi, who never did conduct it. But there’s general agreement that, cuts aside, the 1890 revision improves on the 1887 original.

That leaves the Haas 1887/1890 edition and the Nowak 1890, which, between them, make up the vast majority of the Eighth’s current performances and recordings. (There are, yes, more than 400 of the latter.) Haas’s adherents include Pierre Boulez, Herbert von Karajan, Simon Rattle, and Günter Wand. Nowak has Sergiu Celibidache, Carlo Maria Giulini, Nelsons, and Klaus Tennstedt on his side. A number of conductors have recorded both versions. Scholars are still debating whether the cuts and some of the other changes in the 1890 revision make the symphony more or less Brucknerian. Zander used the Haas edition, a choice enthusiastically supported by Michael Steinberg’s decades-old essay in the program book.

The other great question in Bruckner interpretation has to do with tempo and performance style. Recorded Eighth timings range from Tennstedt (1975) at 69 minutes and Hans Knappertsbusch (1955) at 70 to Celibidache (1993) and Rémy Ballot (2014), both of whom clock in at about 104. In general, the earlier recordings are faster, lighter, more Schubertian, with more local nuances of pacing and dynamics. The more recent trend has been toward the mystic and marmoreal, even when the tempos, as in Karajan’s 1988 recording with the Vienna Philharmonic, are moderate. The tempos Friday weren’t so very different from Karajan’s, but Zander supplemented the Haas edition with performance indications from the 1892 published score (a copy of which his father carried with him to the Russian front in the final year of World War I), and that took him in a Bruckner direction you don’t often hear these days.

In an average performance, the first two movements run about 15 minutes each and the last two some 25 minutes each. The Allegro moderato purports to be in C minor, but the opening dotted motto rhythm suggests instead B-flat minor. The movement turns out to be a harmonic pilgrimage whose goal is C minor; most of the journey, however, is spent conversing with that key’s chromatic neighbors. The development seems hardly to have started before Bruckner layers the inverted second subject on top of the first in a tripartite eruption big enough to end not just the movement but the entire symphony. Yet the pilgrimage continues, C minor still barely in sight. The climax has four French horns and three trumpets blasting out the opening motto rhythm over the triple-forte orchestra—only for the orchestra to stop dead and leave the brass blaring into the void. (Bruckner called this moment “the annunciation of death.”) The coda runs like a clock, ticking life’s seconds away.

The Scherzo combines two one-bar motifs, one rising, one falling, in what feels like a race against time. The Trio brings no cheerful interlude but a somber slow miniature complete with triple harp (the instrument’s first appearance in a Bruckner symphony). The Adagio is Bruckner’s most expansive symphonic movement; in that 1993 Celibidache recording, it runs 35 minutes. It’s binary, like the Adagio molto e cantabile of Beethoven’s Ninth or the Langsam finale of Mahler’s Third. The first subject, static at first, keeps wandering off into the dark night of the soul, despite the second subject’s attempts at reassurance. After a few crises of faith, the second subject prevails, in a coda of cradling consolation. The Finale opens with galloping fanfares that promise a movement of great energy and excitement. Instead, Bruckner spends another 20 minutes meandering to the harmonic ends of the earth. Toward the end, the symphony’s opening motto rhythm reappears, unambiguously in its proper key, and that propels us toward the coda, where Bruckner combines themes from all four movements in an mind-bogglingly apocalyptic conclusion.

Zander timings were a shade more expansive than in 2010: 16 minutes each for the Allegro moderato and the Scherzo, 29 for the Adagio, 25 for the Finale. The Adagio and the Finale, in particular, didn’t sound that slow. It’s a measure of Zander’s mastery that they could take that long and not plod.

To my ears, the playing was very loud. I was sitting in the last row in the back of the second balcony, so I wasn’t too close to the stage. The brass felt overbalanced, and the climaxes throughout seemed un-differentiated. My other reservation concerned the pauses that separate sections: they didn’t all seem as pregnant as they did in 2010.

Nevertheless, you could consider this a remarkable performance from a conductor and a semi-professional orchestra who perform just four times a year. Zander understands how to paragraph and shape Bruckner’s sundry segments so that everything doesn’t run together—perhaps the most essential quality in a Bruckner conductor. The opening dotted motto rhythm can sound slack; here it was alert, even electric. The second subject, with its Bruckner rhythm, sounded lush and full-throated; the third subject strode mysteriously. Zander built tension without rushing, and he didn’t slow the clock at the end. Time simply ran out. 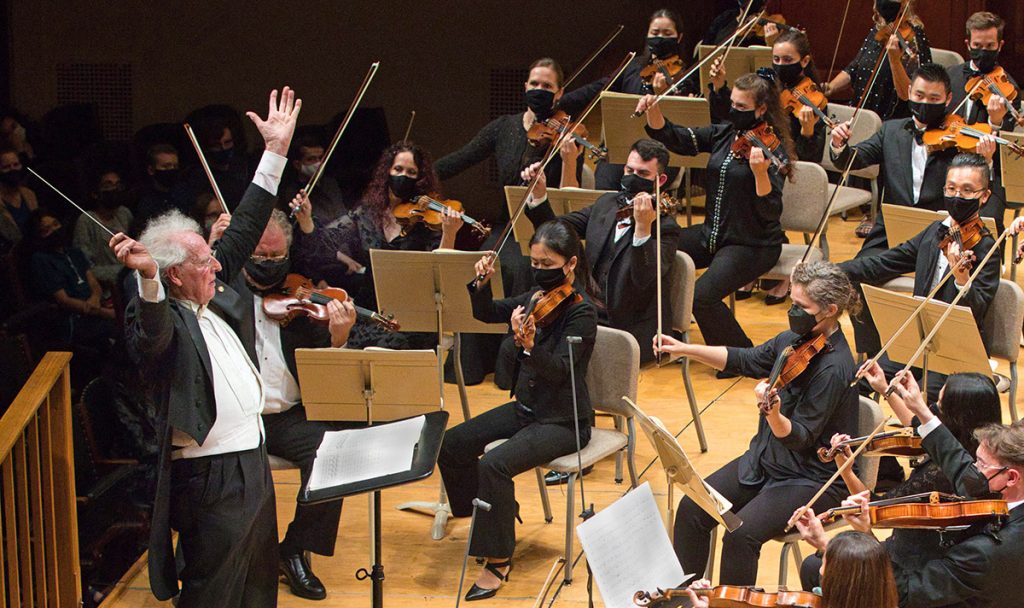 If not quite Mendelssohnian, the light-footed Scherzo moved at good clip, with no hint of the obsessive counting that characterizes some interpretations. The 2/4 Trio was minuet-like at first, before surging with romantic yearning. Perhaps it was the 1892 score’s performance indications, but Zander seemed to have Mahler in mind as he created an unusually human Bruckner, channeling the composer who played fiddle for town dances, loved dancing himself, and fell in love more than once.

The Adagio gave further evidence of the 20th century’s earlier Bruckner performance style: the second subject was surely faster than it had been in 2010, creating greater contrast. The little sigh Zander gave the first descending motif (bar 7) made it clear the movement was not going to be all gray and penitential. Rather than wondering where he was going, he seemed to be reveling in where he was. Just before the first subject makes its third appearance there came another Mahler moment, as the delicate pizzicato strings suggested the Adagio of the unfinished Tenth. The crises of faith seared; the coda found the strings in proper proportion against the four French horns and four Wagner tubas.

In his pre-concert talk, Zander pointed out that Bruckner marked the 2/2 Finale (“Feierlich, nicht schnell”) to begin at 69 minims per minute and suggested that everyone takes it too fast. Few performances actually do hew to the composer’s metronome mark. Otto Klemperer’s 1970 EMI recording is one; Nelsons’s new recording, on the other hand, starts quite a bit faster. Bruckner appears to have had galloping horses in mind, and Zander proved that at 69, the opening can still gallop. His tempo also eased the transition to the Langsamer second subject (which Bruckner marked just a little slower at 66), and that made the movement more cohesive.

The Finale, like the opening Allegro moderato, is nominally in sonata form, but Bruckner is at his most creative (or wayward) here, and it’s easy for conductors to go wrong. (Klemperer “solved” the problem by cutting 162 of the Nowak score’s 704 bars.) As in the Adagio, Zander’s recourse to the 1892 performance indications made the journey a little easier to follow. He highlighted, for example, the return of the first subject from the Allegro moderato by speeding up slightly, the way Furtwängler and Knappertsbusch used to. The C-major coda, with the four themes clearly outlined, was as brilliant as you could desire. The Eighth concludes with a unison descent down to C. Bruckner marked this final bar “ritenuto.” Some conductors snap it off; some drag it out. Zander slowed down just enough to signal the end.

Now that Nelsons’s recording of the Eighth is out, we can hope that it won’t be another 23 years before we hear Bruckner’s masterpiece in Symphony Hall again. All the same, Friday’s performance was well worth the wait.