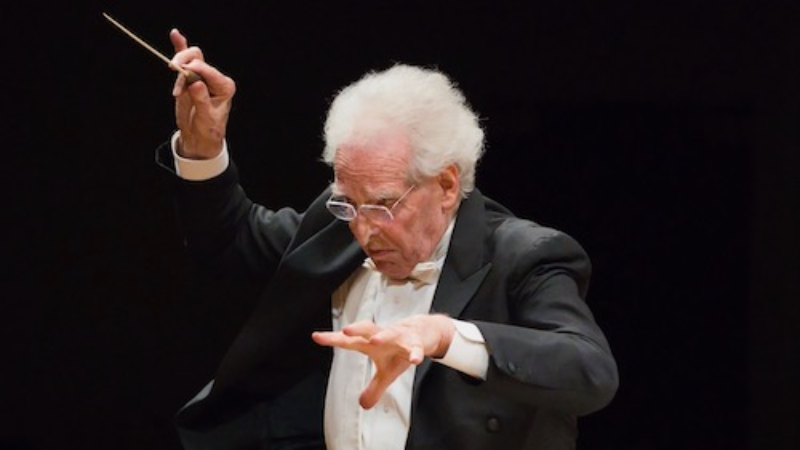 Back in the early days of the pandemic, when the future of orchestral concerts looked bleak, there was concern in some corners that the era of programming great Romantic warhorses, with their attendant throngs of performing forces, had come to an end. Happily, that hasn’t happened.

Even so, the Boston Philharmonic Orchestra’s four concerts this year seemed tailor-made to proactively refute any such suggestion. As if to put an exclamation point on the issue, on Friday night the BPO and music director Benjamin Zander crowned their season in front of a full, sometimes restless, house at Symphony Hall with a towering performance of Gustav Mahler’s epic Symphony No. 3.

Finished in 1896 and premiered in 1902, the Third, which runs about 100 minutes, is Mahler’s longest symphony, if not quite his biggest in terms of players. Given the music’s ambitious focus—six movements chart a course from the depths of primordial nature to the heavens, with respective stops among the flowers, animals, humanity, and angels along the way–that’s almost to be expected.

To be sure, no other piece in Mahler’s oeuvre realizes with such daring the composer’s belief that the symphony “must be like the world–—it must embrace everything.” If anything, this music actually exceeds that claim. As such, it’s a particularly meaningful work to present in these fraught times.

Zander, of course, is an experienced hand at Mahler (he last led the sprawling Third locally in 2002). His approach to the composer is singular, neither interventionist in the mold of Leonard Bernstein or Andris Nelsons, nor objectively clinical like Pierre Boulez. Rather, he tends to chart a middle course, one that’s rooted in the score’s detailed instructions but principally considers the music’s larger harmonic and expressive contexts. The resulting performances don’t exactly play themselves, but they’re usually marked by a singular naturalness of purpose and character. That’s exactly how Friday’s Mahler Third proceeded. The sprawling, thirty-five-minute-long opening movement unfurled with breathtaking clarity of form and attention to articulative detail. To be sure, this is one of Mahler’s most challenging essays, structurally, its architecture and content often seeming digressive.

nse approach to the music—well-paced, cleanly balanced, rhythmically tight—paid dividends. Within these given parameters, the BPO was free to explore the movement’s huge range of colors and textural subtleties. Accordingly, the whole reading took on a thoroughly visceral, engaging quality, by turns diaphanous and stentorian. The brass playing, highlighted by principal trombone Gregory Spiridopolous’s burnished solos, was particularly excellent.

Similarly captivating was the atmosphere the orchestra conjured in the minuet and scherzo movements. The latter, with its brawny climaxes and stylish layerings of musical ideas, was further enhanced by the ensemble’s flawless transitions into Andrew Sorg’s beguiling off-stage post-horn solos.

In the fourth movement, mezzo-soprano Susan Platts intoned Mahler’s setting of Friedrich Nietzsche’s oracular “O Mensch! Gib Acht” with creamy tone and excellent diction. Her account of the role of the penitential sinner in the otherwise exuberant fifth movement was likewise fervent.

Platts was joined in the latter’s “Es sungen drei Engel” by members of Chorus Pro Musica and The Choristers of Saint Paul’s Choir School, Harvard Square. Though the Choristers sounded a bit recessed from the second balcony, the larger vocal contributions were tonally true and rhythmically taut.

It was the finale’s incandescent meditation on Divine Love, though, that provided the evening its expressive heart. Here, the BPO played with rich, spacious tone in the devotional opening bars, growing in zeal and warmth as it continued. By the time the final peroration arrived, the ensemble–though sounding a touch fatigued–and Zander (seemingly at full strength) were simply playing as extensions of one another: this was a Mahler performance of conspicuous emotional unanimity and musical intentionality.

The thunderous ovation that followed seemed to acknowledge as much. To be sure, the music’s sense of triumph and the BPO’s realization of it were one and the same.

The success of the performance was even more impressive when Zander and colleagues had to contend with some of the most appalling audience behavior Boston has seen this season. These distractions included a loudly jangling cell phone, electronic message pings, surreptitious video recording, loudly whispered commentary, and frequent noisy exits and entrances regardless of what was unfolding onstage. Friday’s audience was hardly a model of concert-hall decorum.

Click here to listen to Zander’s Listening Guide to Mahler’s Symphony no. 3.